OPINION: Taming the dragon through Afghanistan

India-China mining alliance could be the panacea the region needs 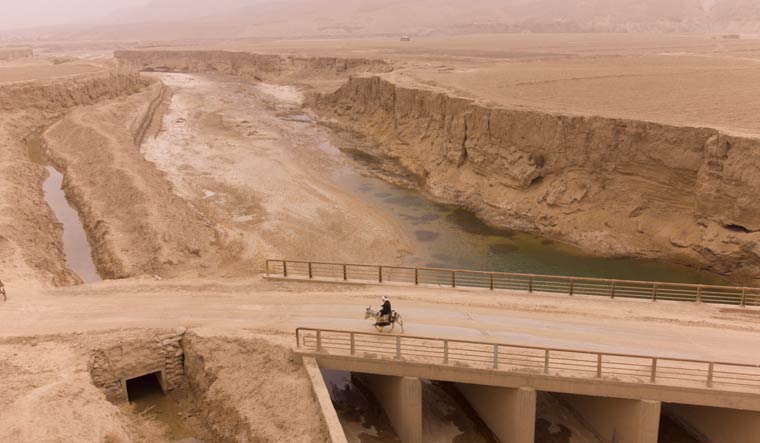 Representational image: A man on a donkey in Afghan carries water canisters across a dried-out river near Sang-e-Atash, Afghanistan | AP

The world order is being disrupted and reset in an unprecedented manner. China under Xi Jinping is rewriting the calculus of global power with an unabashedly assertive Chinese model, anchored on the exploitation of other nations' economic vulnerabilities, coercive diplomacy, the employment of grey zone tools; flexing its military prowess and pushing a belligerent China’ image.

The world finds itself caught up in the global power tussle and is forced to react to each move that China makes; countering China’s claim over Taiwan and South China sea, economic subjugation of weaker nations, supply chain monopoly and acquiring natural resources around the world, efforts to secure assertive presence in global waters, manipulating world bodies, demonstrating its remarkable advancements in technological, space and cyber capabilities, exploitation of open societies of the democratic world and demonstration of a readiness to wage war. Although US and China remain the main players in the ongoing world order tussle, Russia, India, Australia, Japan, Isreal, Saudi Arabia, Taiwan and Europe are all weight pieces in the power balance, with their own varying geo-strategic, geo-economic and geopolitical clout. While the clout of some of these players is on a steady rise, that of Europe and the UK seem to be on the decline.

China would reckon India becoming a serious regional as well as a global rival in the long term; a potential rival of matching size, set firmly on a steady development trajectory in its immediate neighbourhood, with a diametrically opposite political ideology and a free society, posing serious non-military threats to China’s political order and its closed society. China thus has all reasons to feel uncomfortable with a fast-developing India at its doorstep.

In the backdrop of this, it is only logical that while nations are busy guarding their national interests to secure favourable stakes in the ongoing power struggle and changing world order, China is making every effort to keep India pinned down. Keeping India’s neighbourhood in turmoil and exploiting its noisy political structure, its open society, its diversity, vulnerabilities and democratic institutions while keeping the bilateral issues and border disputes simmering is an effective, low cost, easy to execute and sustainable option for China to keep India in a perpetual crisis management mode within a morass in the region.

Amidst the cacophony of this global power tangle, resolution of bilateral issues between India and China and countering China’s incursions and provocations in South Asia is unlikely to be of major concern for the global community. India China border issues will, therefore, remain an issue for the two neighbours to mutually address. While the status quo in our bilateral relations with China is detrimental to India’s interests, it may suit the Chinese scheme of things. The onus is thus on India to devise means to circumvent this morass and be counted as a factor to reckon with, economically, diplomatically and militarily, in the larger global equation.

Despite the continuing standoff, China was India’s second-largest trade partner in 2021 and India was amongst the top 10 trading partners in terms of Chinese exports. Bilateral trade between the two touched $125 billion in the year, skewed heavily in China’s favour with India’s imports from China accounting for almost $97 billion. India has a considerable dependency on China when it comes to electronic goods, mechanical and electrical machinery and API (Active Pharmaceutical Ingredients). Although events during the past two years have exposed this danger and corrective measures have been initiated, the adverse imbalance and dependency will take time to overcome. It is, however, important to note that even a prolonged stand-off, peaking to a degree ‘just short of war’, has not impacted the bilateral trade in any significant manner. The reason for this needs to be seen from the perspective of both countries. Considering its own need to grow at a brisk pace, India cannot wish away its dependency overnight while China itself is facing one of the toughest economic challenges in making the transition from an upper-middle-income economy into a high-income economy, that too at a time when it is facing the real danger of ‘growing old before growing rich’.

In addition, China is also faced with serious environmental issues which could adversely impact the growth of its manufacturing industry and an even more threatening situation caused by the inherent incompatibility of its political ideology with huge multinational conglomerates which are essential and unavoidable parts of any modern high-income economy. China has in the recent past, also garnered unprecedented global ill will, lost whatever little soft power it had and is increasingly being seen as a dangerous source of economic aid’.

An Afghanistan in turmoil, in their immediate neighbourhood, is detrimental to the interests of both, India and China. The Taliban, having taken control of Afghanistan, now finds itself in political, economic, social and economic quicksand. Not a single country, not even Pakistan, has recognised the new dispensation. The inflow of even sustenance aid seems patchy. Considering the total lack of confidence among potential donors in routing aid to Afghan people through the Taliban and the absence of any viable aid delivery mechanism, chances of any improvement in the situation looks very unlikely. Iran’s recent outreach, with the delivery of 50,000 tons of food grains from India in addition to medicines, COVID-19 vaccines and other aid material to Afghanistan—amid intransigence by Pakistan—is a very positive development. By January 1, 2022, India had delivered 500,000 doses of COVID-19 vaccines to Afghanistan via Iran. A UNDP report dated September 9, 2021, brought out the pathetic situation in Afghanistan, highlighting the possibility of 97 per cent of its population plunging into poverty by mid-2022.

The only resource that Afghanistan can legitimately monetise which would render immediate as well as recurring benefits to its population and to any dispensation that may come to power in the country, is its mineral resources. Results of the extensive Soviet exploratory work of the 1970s and the later US Geological Survey of 2004-2011 assessed the mineral wealth of Afghanistan which includes copper, iron ore, lithium, rare earths, gold at over $1 trillion. Adverse security environment, general uncertainty, and lack of infrastructure such as roads, power, water etc have prevented exploitation of Afghanistan’s rich mineral wealth.

This is where a huge opportunity lies. Together, India and China can lay the foundation for getting Afghanistan back on the road while also deriving immense benefits for themselves.

An India-China mining alliance in Afghanistan can restrain Pakistan and get the Taliban to fall in step and ensure security, bring in technology, logistics and skilled manpower. A suitably structured joint governmental framework leading this mining initiative in Afghanistan will provide the required confidence to attract adequate investment from around the world. There are global investors who have evinced interest in investing funds if such a joint venture indeed materialises and also viable models for mobilising considerable domestic investment from the Indian stock exchange. While India and China would have to align on a percentage of the output at a cost worked out on a set of mutually agreed parameters, Afghanistan will benefit from sizeable initial and recurring royalty revenue depending upon the actual mineral production, in addition to the infrastructure, direct and indirect employment generation and immense direct benefits to its agriculture in the mining jurisdictions by way of irrigation, power supply, technical inputs and support in terms of soil composition, crop options, hybrid seeds etc.

Incentives will accrue to Pakistan and Iran too, in terms of huge benefits to their transport industry and transit fee for the use of their roads and ports. For Afghanistan, the opportunity beckons for shifting from an informal economy based on ‘illegal drug trade and external aid’ to a sustainable formal economy, kick-started by exploiting its untapped mineral wealth. For the region as a whole, India-China cooperation in Afghanistan holds the potential to mark the beginning of an unprecedented environment of peace, stability and regional cooperation. Beyond the region, the evolving world order will witness some unexpected twists and turns.

The author is the former deputy chief of the Indian Army.