Dozens of rescue workers, assisted by dogs and drones are searching the site 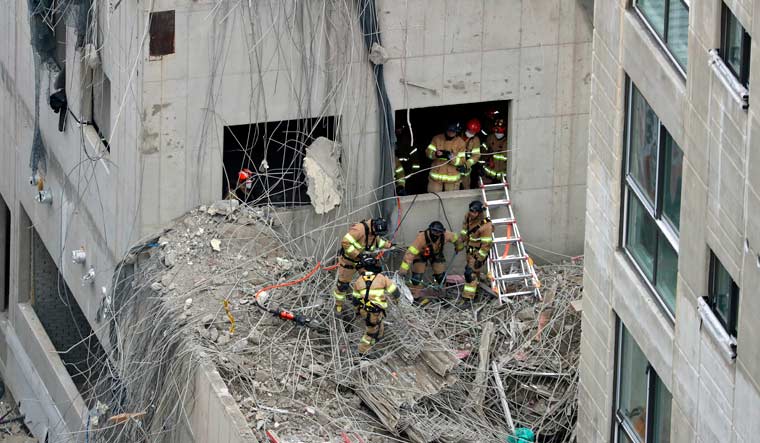 South Korean rescuers on Thursday located a man under a pile of debris and broken concrete at a 39-floor building that partially collapsed three days earlier while under construction, leaving six workers missing, officials said.

Crews were trying to clear the rubble to reach the man, but have yet to confirm whether he is alive, said Yoo Man-geun, an official in southern Gwangju city.

Dozens of rescue workers, assisted by dogs and drones equipped with thermal cameras, are searching the site, but their efforts have been slowed by worries about the stability of the apartment building in the city's Hwajeongdong district which partially collapsed Tuesday.

HDC Hyundai Development, the main contractor for the project, plans to deploy unmanned excavators to clear the rubble and use nets and other safety measures in case the structure crumbles further, Gwangju Mayor Lee Yong-seop said. HDC also plans to remove a damaged crane that had been attached to the building by Sunday to prevent the structure from breaking further.

About 10 vehicles were destroyed and the occupants of nearly 200 nearby houses and shops were forced to evacuate following the collapse, which sent debris spilling across nearby streets and left a huge pile of rubble at the bottom of the structure, exposing mangled steel beams.

The incident has triggered public anger in a country that has long grappled with deadly accidents attributed to lax safety standards and regulations, which experts say were often overlooked as it rose from poverty and war to an Asian economic powerhouse.

The Ministry of Employment and Labor, which investigates industrial safety lapses, said it is questioning HDC's chief supervisor at the apartment project and an official of a partner company that handled the concrete work. The ministry could recommend that prosecutors bring criminal charges if it concludes that the companies violated safety laws.

President Moon Jae-in ordered officials to thoroughly investigate the cause of the collapse and come up with new safety measures to prevent similar accidents.

Some experts have speculated that not enough time was allowed for the concrete to fully dry and set during the cold and snowy weather.

HDC issued a statement saying it deeply apologizes to the people who are missing, their families and the citizens of Gwangju, but did not comment specifically on what caused the collapse.

The Gwangju government has suspended all five of HDC's ongoing construction projects in the city as it investigates the collapse. Lee said it could force HDC to tear down the damaged building and rebuild it from scratch if the structure's safety isn't assured.

HDC was also involved in a deadly accident in Gwangju last June in which a five-story building that was being demolished for a construction project collapsed and sent debris falling onto a bus, killing nine people on board.

Officials said 394 workers were employed at the Hwajeongdong construction site, including the six who remain unaccounted for.

Emergency workers rescued three laborers on Tuesday, including two who had been trapped in a shipping container hit by debris, but search operations were halted hours later over concerns that the structure could collapse further.

The search resumed on Wednesday after a safety inspection by government and private experts, who concluded it was safe for rescuers to search the building's interior. The inspectors were concerned about sections near the crumbled exterior and the heap of rubble, which were mostly searched by dogs and drones.