Afghan boy, who was passed to soldier across airport wall, reunited with family

He was found by a taxi driver, who took him home to raise the baby as his own 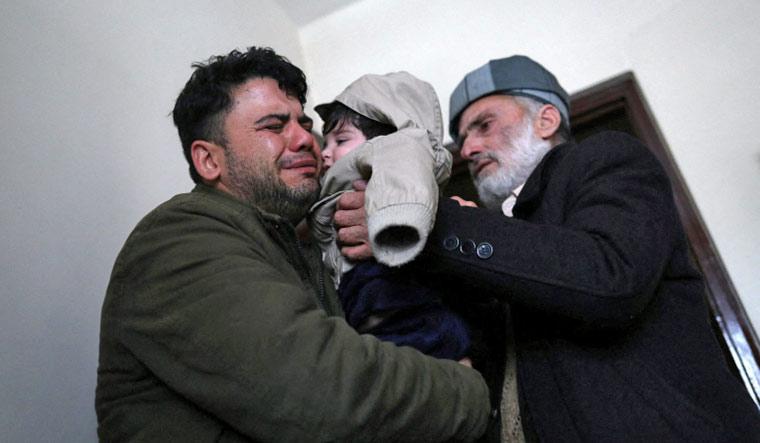 Hamid Safi, a 29-year-old taxi driver who had found baby Sohail Ahmadi in the airport, cries as he hands over Sohail to his grandfather Mohammad Qasem Razawi in Kabul, Afghanistan, January 8, 2022 | Reuters

An Afghanistan infant boy, who was handed to a soldier across an airport wall has been found and is reunited with his family. The boy was handed over amidst the chaos of American evacuation and the Taliban's take over. He was found by a 29-year-old taxi driver Hamid Safi, who took him home to raise the baby as his own.

The baby has been finally reunited with his family. In August, two-month-old Sohail Ahmadi was passed to a soldier to protect him from the chaos as thousands pushed to get into Kabul airport. But, once his family reached Kabul airport, they couldn't find him. Sohail's father Mirza Ali Ahmadi, who had worked as a security guard at the US embassy, mother Suraya and their four other children were put on an evacuation flight to the US. For several months, the family did not know where Sohail was.

Safi and his wife named the baby Mohammed Abed and posted pictures of him with the rest of the family on his Facebook page. Sohail's grandfather, after confirming the baby's whereabouts, took the journey from Badakhshan to Kabul asking for the child to be returned. Safi, however, refused to hand Sohail over. Safi demanded that he and his family be evacuated to the US too. After seven weeks of negotiations, Sohail was reunited with his grandfather.