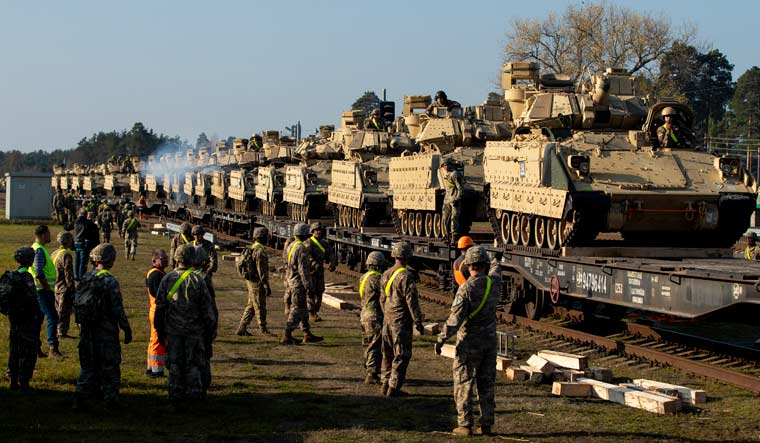 FILE - US Army personnel prepare to unload Bradley Infantry Fighting Vehicles from rail cars as they arrive at the Pabrade railway station some 50 km (31 miles) north of the capital Vilnius, Lithuania, Oct. 21, 2019 | AP

Days after Russia demanded that NATO rule out eastward expansion and withdraw from its military positions outside of its borders, the top general of the security bloc has suggested the alliance strengthen its presence in Bulgaria and Romania.

According to a report by German newspaper Spiegel, NATO Supreme Allied Commander Europe Tod Wolters has sought to expand the alliance’s “Enhanced Forward Presence” (EFP) under which it had deployed military forces to the Baltic states and eastern Poland.

The paper said it had “information” that Wolters had called for a reinforcement of troops on the eastern border of NATO.

The report comes amid a military standoff between Russian and Ukrainian forces, with Moscow having deployed over 100,000 troops near its border with Ukraine.

Russia on Saturday sent nuclear-capable bombers on patrol over Belarus, its third such deployment this month. In October, Russia backed Belarus during a border crisis that saw thousands of migrants and refugees, mostly from the Middle East, cross over into Western Europe via Belarusian territory. There are fears that Russia could mount an attack on Ukraine via Belarus, which borders northern Ukraine.

With Romania on Ukraine’s southwestern border, NATO could bolster Kiev’s defences from the South, as well as in the neighbouring Black Sea. Romanian President had tweeted his support for an “increased NATO & US military presence in Romania and at the #BlackSea”.

While Ukraine is not a NATO member, it enjoys proximity with the Western bloc that had worried Russia. Putin has warned the alliance of crossing Russia’s “red lines” with regard to deploying missiles in Ukraine, warning of an equivalent Russian response if this were to happen. Russia had recently tested hypersonic missiles capable of travelling at nine times the speed of sound.