European ruin: COVID-19 paints a grim picture as the holiday season closes in

'It is evident that the pandemic is not yet over' 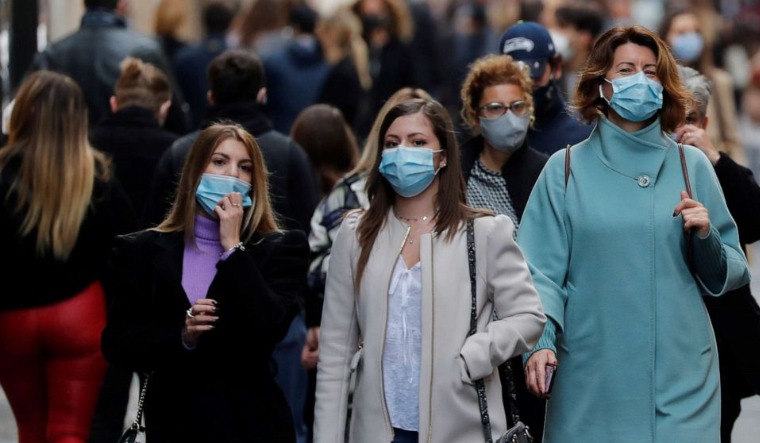 People wearing protective masks walk along the principal shopping street of Via del Corso, Rome, as the number of people infected by COVID-19 continues to rise | Reuters

Europe is in the middle of a COVID-19 crisis again. The spike in cases has been mainly due to the delta variant. But, as a cautionary step, EU commission chief Ursula von der Leyen, in a tweet on Friday, said they aimed to stop air travel from the southern African region amid concerns of a new variant detected in South Africa. Von der Leyen tweeted: “The commission will propose, in close coordination with the member states, to activate the emergency brake to stop air travel from the southern African region due to the variant of concern B.1.1.529." South African scientists have said that the variant has a "very unusual constellation" of mutations, which could help it evade the body's immune response and make it more transmissible.

"It is evident that the pandemic is not yet over,” European Commissioner Didier Reynders told CNBC. The rise in numbers has been more in countries where a large population remains unvaccinated. The daily new cases of COVID-19 in Europe is currently at 3.3 lakhs as of November 21, 2021. In June 2021, the number was around 40,000. Germany is currently reporting an average of 200 virus-related deaths and Russia is at 1,214 deaths a day.

France has increased COVID-19 booster vaccines and started efforts to get injections to children as young as five on Thursday, to combat a surge in cases.

Booster injections will now be offered to everyone over the age of 18 in France, rather than just the over-65s and those with underlying health conditions.

The European Centre for Disease Prevention and Control (ECDPC) advised vaccine boosters for all adults on Wednesday, with those over 40 receiving priority.

"Europe is entering the fourth big COVID-19 wave. And even if it has generally high vaccination rates, the high transmissibility of Delta combined with lower temperatures is pushing infection levels high, and we are also seeing hospitalisations and deaths, sadly, increasing. Countries will try to avoid full lockdowns, but further restrictions are likely in many places with exponentially rising cases," Rasmus Bech Hansen, the co-founder and CEO of Airfinity, a global health intelligence and analytics firm had said on November 20.

As of November 22, Russia is reporting 35,996 new cases each day, Netherlands at 21,073, Austria at13,851 and Italy at 9,375. Portugal seems to be an exception to this curve for now—the country is bringing back some tight pandemic restrictions, less than two months after scrapping most of them when the goal of vaccinating 86 per cent of the population against COVID-19 was reached.

European nations are imposing COVID-19-time restrictions on theatres and other entertainment venues. In Vienna, all performances are banned until December 13 and in Munich, performances continue despite a surge in cases. But, only vaccinated patrons or those who have recovered from the virus are being allowed. In Milan, theatres are accepting only vaccinated audience members. These performance venues had enjoyed relative normalcy only a few months ago. This month the Netherlands had imposed a partial lockdown where venues hosting sit-down audiences could run shows, but bars and restaurants had to be closed by 8 pm.

Europeans are not happy at the prospect of the restrictions being imposed. In the Netherlands, over 130 people were arrested during three days of rioting prompted by a COVID-19 curfew, and police in Brussels shot water cannon and tear gas at a protest attended by 35,000 people on Sunday. in Denmark, around 1,000 people protested against the government's plans to reintroduce the COVID-19 pass for civil personnel.

In Britain, leaders had been talking of living with the virus since June. Britain is out of step with many of its neighbours. And this time, it’s happy to be different. The UK has endured three nationwide lockdowns and recorded nearly 1,45,000 deaths from the coronavirus, the highest toll in Europe after Russia. The surge that is now hitting mainland Europe, driven by the highly transmissible delta strain of the virus, walloped Britain in the summer, just as the government removed all remaining legal restrictions on the economy and daily life. A relatively high vaccination rate — particularly among the elderly — means hospitalisations and deaths are far lower than in previous waves. Still, 130 people a day died in the past week after testing positive for COVID-19. At the same time, Britain’s hospitals have not been overwhelmed with COVID-19 cases, though they are extremely busy as the health system struggles to clear a huge backlog built up during the pandemic. Johnson’s Conservative government has so far not had to trigger its ‘Plan B,’ which would reintroduce mask mandates and work-from-home orders to ease pressure on the health system.

That could yet change. The pandemic's capacity for nasty surprises was highlighted Friday when Britain banned flights from South Africa and several other countries over a new variant described by scientists as a concern because of its high number of mutations and rapid spread. For now, life in Britain can feel unusually normal — even festive, as many embrace the holiday season with renewed enthusiasm. Will other European nations soon follow suit, and brace themselves to live with the virus?

-With inputs from PTI