Plant-based options to turkey are growing in vogue 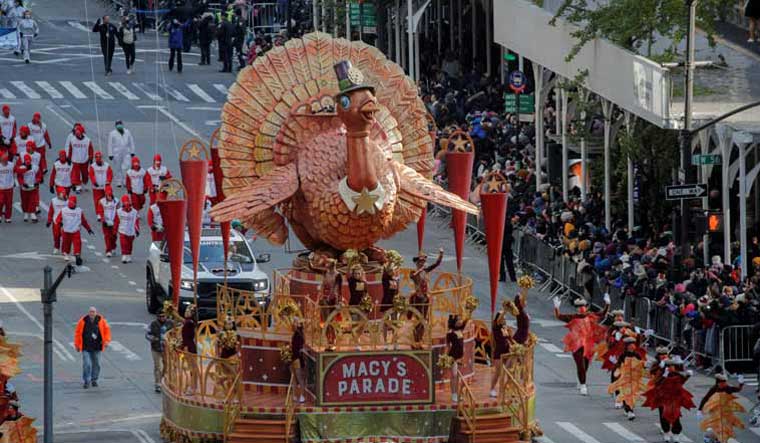 “Turkeys are some of the most gentle creatures in the world,” posted superstar Billie Eilish on her Instagram stories, along with a photo of her cradling a turkey.

“46 million of them are killed every thanksgiving. I know it’s hard to change traditions but just keep it in mind :),” she wrote.

She wasn't the only celeb to take a stand: Earlier, Joaquin Pheonix issued a call for people to "adopt, not eat" a turkey on Thanksgiving.

Thanksgiving, a national holiday whose ritual consumption of Turkey is considered so key to the American experience that the President himself pardons a few birds every year (this year’s lucky pair was named Peanut Butter and Jelly), was celebrated by millions of Americans on Thursday.

US President Joe Biden President Joe Biden wished Americans a happy and closer-to-normal Thanksgiving, the second celebrated in the shadow of the coronavirus pandemic. For him, the emphasis was on welcoming the resumption of holiday traditions in many homes, disrupted by the virus.

“As we give thanks for what we have, we also keep in our hearts those who have been lost and those who have lost so much, the president said in a video greeting recorded with first lady Jill Biden at the White House.

But as awareness of animal cruelty increases, alongside advances in plant-based meat, many are choosing to go meatless on the occasion. Ironically, November 25 is also celebrated as International Meatless Day.

Market research firm Dynata (on behalf of vegan brand the Meatless Farm) estimated that nearly a third of Americans were considering a meatless Thanksgiving in 2019.

Advocates of vegetarian and vegan diets have long criticised Thanksgiving’s emphasis on the slaughter of the bird, with PETA encouraging a “ThanksVegan” celebration. Many brands making vegan alternatives to Turkey shared recipes on social media on Thanksgiving. According to Forbes, 4.5 million plant-based turkeys will be consumed this Thanksgiving.

But many who are going turkey-free are not doing so out of ideology. As the global supply chain crunch continues, turkey supplies have also suffered. Turkey prices are up and frozen turkey inventories have dropped 25 per cent below their three-year average volumes, according to US Department of Agriculture Data, Yahoo! Finance reported. However, as of Thursday, AP reported that there was no shortage of turkeys in the country.

Some communities are also opting not to celebrate Thanksgiving. Members of Native American tribes from around New England are gathering in the seaside town where the Pilgrims settled not to give thanks, but to mourn Indigenous people worldwide who've suffered centuries of racism and mistreatment.

“We Native people have no reason to celebrate the arrival of the Pilgrims," said Kisha James, a member of the Aquinnah Wampanoag and Oglala Lakota tribes and the granddaughter of Wamsutta Frank James, the event's founder.

“We want to educate people so that they understand the stories we all learned in school about the first Thanksgiving are nothing but lies. Wampanoag and other Indigenous people have certainly not lived happily ever after since the arrival of the Pilgrims,” James said.

“To us, Thanksgiving is a day of mourning, because we remember the millions of our ancestors who were murdered by uninvited European colonists such as the Pilgrims. Today, we and many Indigenous people around the country say, 'No Thanks, No Giving.'”

It's the 52nd year that the United American Indians of New England have organised the event on Thanksgiving Day. The tradition began in 1970.