Elharrar has muscular dystrophy and uses a wheelchair 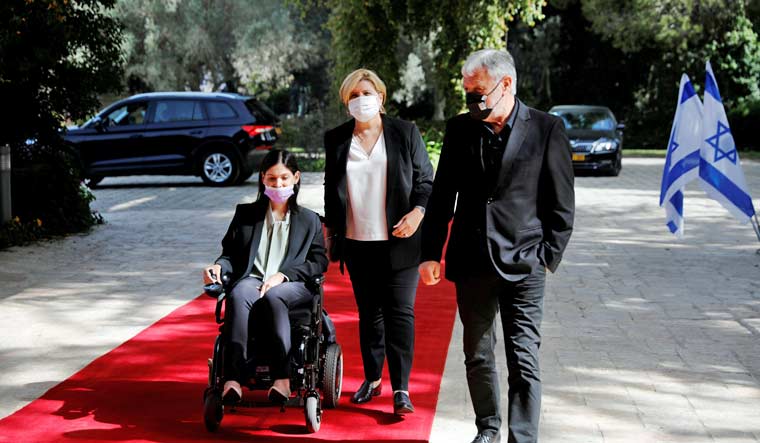 Karine Elharrar, Orna Barbivai and Meir Cohen from the Yesh Atid party arrive for consultations on the formation of a coalition government, at the President's residence in Jerusalem April 5, 2021 | Reuters

Israel's energy minister Karine Elharrar, on Monday, stated in a television appearance that she was unable to attend UN's COP26 session in Glasgow because the route to the venue wasn't wheelchair-friendly. Elharrar told Israel's Channel 12 that she couldn't get to the conference grounds since the only way to get there was to walk or take a shuttle that did not have wheelchair accessibility. "I came to COP26 to see my counterparts throughout the world and further our collective effort against the climate issue," Elharrar tweeted.

Elharrar, who has muscular dystrophy ended up awaiting an appropriate shuttle to the venue for two hours. But, eventually, the shuttle offered to her was not accessible by wheelchair. She eventually returned to her hotel in Edinburgh. The Israeli delegation said that they have formally complained to the organisers of the event.

Bennett said Elharrar’s vehicle would arrive at the summit area on Tuesday as part of his official convoy.

The Foreign Office minister James Cleverly tweeted: “I am deeply disappointed and frustrated that minister @KElharrar could not access Cop today. The Cop venue is designed to be accessible for all. I have spoken to the minister about this and I look forward to meeting her tomorrow.” Elharrar was reportedly taken to various entrances of the venue, but, was not able to get inside due to the lack of accessibility.