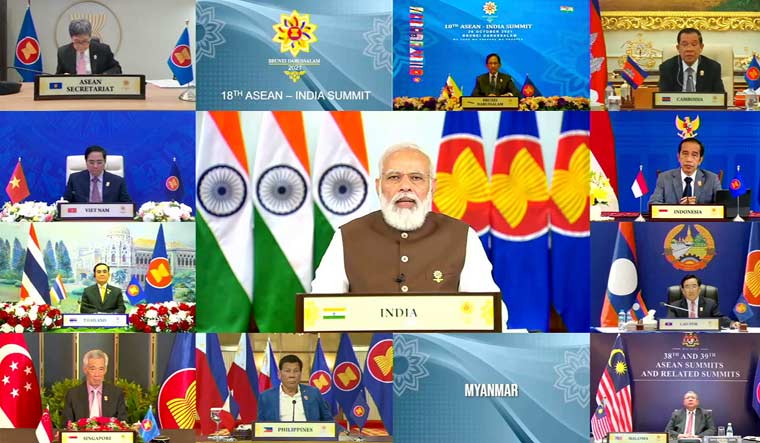 India and the 10-nation ASEAN on Thursday vowed to work towards an Indo-Pacific that embraces openness, transparency, inclusivity, respect for sovereignty and non-intervention in the backdrop of growing global concern over China's military muscle-flexing in the region.

At the annual India-ASEAN summit, the leaders of the two sides discussed the situation in the South China Sea and affirmed the importance of maintaining and promoting peace, stability, safety and security in the resource-rich region.

In his address, Prime Minister Narendra Modi underlined the centrality of the Association of Southeast Asian Nations (ASEAN) in India's Act East Policy and in the country's vision for the wider Indo-Pacific region.

He also announced that 2022 would be celebrated as the 'ASEAN-India Friendship Year' to mark 30 years of their partnership.

"We all had to deal with many challenges due to the COVID-19 pandemic. But this challenging time was also a test for India-ASEAN friendship. In the Covid era, our mutual cooperation, mutual sympathy, will continue to strengthen our relationship in future, and will be the basis of goodwill among our people," Modi said.

In the summit, the leaders exchanged views on enhancing India-ASEAN connectivity in "broadest terms" including physical, digital and people to people, the Ministry of External Affairs (MEA) said in a statement.

On trade and investment, he underlined the importance of diversification and resilience of supply chains for post-Covid economic recovery and in this regard, the need to revamp the India-ASEAN free trade agreement, it said.

The joint statement said the two sides reaffirmed the objectives and principles of the AOIP which guide ASEAN's engagement in the Asia-Pacific and the Indian Ocean regions.

The MEA said the discussions also covered regional and international issues of common interest and concern, including the South China Sea and terrorism.

"Both sides noted the importance of promoting a rules-based order in the region including through upholding adherence to international law, especially the UNCLOS (UN Convention on the Law of the Sea)," it said.

"The leaders affirmed the importance of maintaining and promoting peace, stability, safety and security in the South China Sea, and ensuring freedom of navigation and overflight," it said.

A number of ASEAN member countries have territorial disputes with China in the South China Sea region. Secretary (East) in the MEA, Riva Ganguly Das, said the joint statement on the Indo-Pacific was one of the very major highlights of this summit.

She said it charts a way forward for practical implementation of the convergences in our vision of the Indo-Pacific to ensure peace, prosperity and stability in the region.

"I think we can definitely say that the adoption of the joint statement on ASEAN Outlook on Indo-Pacific and India's Indo Pacific Oceans initiative is one of the major highlights of this summit," she said at a media briefing.

"We are building upon the convergences that exist between the AOIP as the ASEAN Outlook on Indo-Pacific is called and our own IPOI," she said..

Ganguly said Modi has also invited ASEAN members states to come on board IPOI, which has seven pillars, and Indonesia is already onboard on the pillar of marine resources and this is a very welcome development.

She said the leaders exchanged views on vaccine production and distribution besides deliberating on various ongoing vaccine initiatives.

The ASEAN is considered one of the most influential groupings in the region, and India and several other countries including the US, China, Japan and Australia are its dialogue partners.

The ties between India and ASEAN have been on an upswing in the last few years with the focus being on ramping up cooperation in the areas of trade and investment as well as security and defence.

The two sides also vowed to boost maritime cooperation, including maritime security and information sharing through appropriate mechanisms under the ASEAN-India framework and other appropriate ASEAN-led mechanisms.

The situation in Myanmar in view of the military coup in February also figured in the talks.

"The leaders exchanged views on the current situation in Myanmar, including the ASEAN's efforts in this regard. India remains engaged on this issue and has contributed to the humanitarian assistance to Myanmar," she said.

Ganguly said as a close neighbour of Myanmar, India will continue to support the restoration of peace, the democratic process in Myanmar for it to emerge as a stable and democratic country.