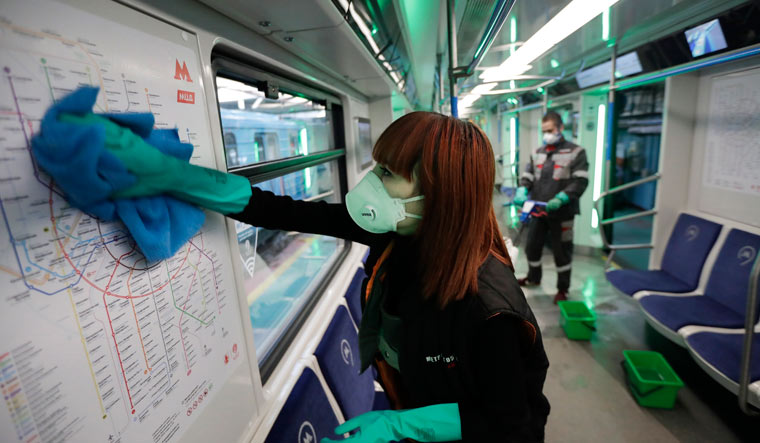 A day after Russian President Vladimir Putin announced a week-long nationwide paid holiday from October 30 to November 7 in a bid to combat the continued surge in COVID-19 case and deaths, the city of Moscow has announced a lockdown as it prepares to reach a “historic peak” in its coronavirus battle.

Between October 28 and November 7 in Russia’s capital, non-essential shops, schools and gyms will be shut while restaurants and cafes will only be allowed to operate takeaway services. Entry into theatres and museums will require proof of either COVID-19 vaccination or recovery and attendance will be capped at 50 per cent with mask mandates and QR-code based entry. In addition, unvaccinated over-60s will now face four months of stay-home restrictions starting October 25. Businesses have been instructed to move at least 30 of their staff to remote work.

The move comes as Russia started to record over 1,000 COVID-deaths a day for the first time since the start of the pandemic, as well as 33,740 new cases. Moscow saw 7,897 new infections on Thursday, the highest figure since June 26.

“The situation in Moscow continues to develop in the worst scenario…In the coming days, we will reach a historic peak in coronavirus battle,” Moscow mayor Sergei Sobyanin said in a statement on Thursday.

"The most alarming thing is the situation with COVID infection among the older generation," he added, saying over-60s accounted for 60 per cent of patients, nearly 80 per cent of people on ventilators, and 86 per cent of deaths.

Russia has so far administered at least 99,382,776 doses according to Reuters data, which is roughly enough to fully vaccinate 34.4 per cent of its population. Despite being the first country to approve a COVID-19 vaccine, Russia has fallen behind several developed nations in vaccinating its citizens.

When Putin announced the non-working week, he urged Russian citizens to get vaccinated, warning that the mandatory public holidays would be extended if the number of cases did not start to fall.

While Russia has reported over 8 million cases and over 227,000 deaths since the start of the pandemic, its total excess fatality count in the same period is 660,000, Moscow Times reported. While announcing the non-working week, Putin urged regional authorities not to distort medical statistics. "Understating rates and making the picture look better than it really should be avoided at all cost,” he said.