COP26: What is on the agenda

'You need to create a stable investment environment. You need to fight corruption' 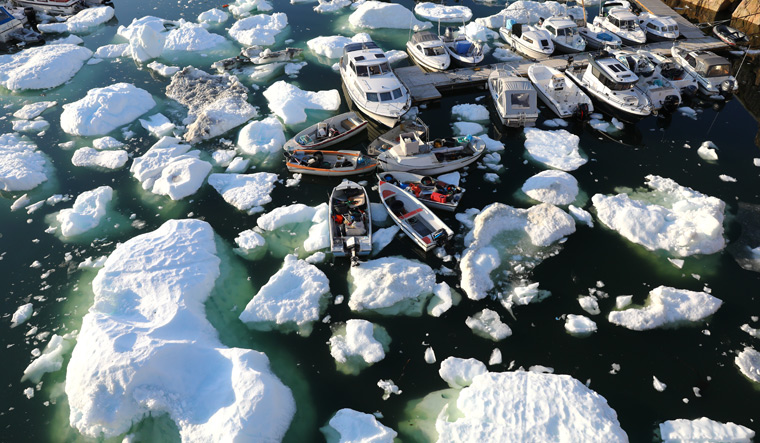 Warming warning: Greenland is experiencing one of its biggest ice-melts. Climate change is one of humanity’s greatest challenges | Getty Images

Representatives from nearly 200 countries will meet in Glasgow, Scotland, for the COP26 climate talks from October 31-November 12. The countries meet to strengthen action tackle global warming under the 2015 Paris Agreement, amid extreme weather events around the world.

In 2015, when nations met in Paris for COP21, they agreed to cut greenhouse gas emissions to limit global warming to 2 deg. C and ideally 1.5 deg.C. To do this, emissions need to be cut in half by 2030 and attain zero emissions by around mid-century. The UN conference was postponed last year due to the coronavirus pandemic. The deadline for countries to make steeper emissions cut pledges is this year.

According to a UN review of new or updated NDCs (Nationally Determined Contributions) submitted by the end of July, 113 of the nations that met in Paris, will reduce their emissions by 12 per cent from 2010 levels by 2030.

However, the total NDCs of all 191 parties to the Paris Agreement would result in a 16 per cent increase in greenhouse gas emissions in 2030 compared to 2010, according to the report.

Around 120 nations have submitted amended NDCs so far, but there is a lack of consistency and no agreed-upon timeline for achieving obligations.

In addition, the NDCs use a variety of methodologies, making comparison impossible.

Negotiators also need to agree on uniform timeframes for future emissions cuts. Major emitters China, India, Saudi Arabia and Turkey -together responsible for around a third of global greenhouse gas emissions - have not yet come forward with strengthened NDCs and need to do so at this conference, known as COP26.

Alok Sharma, president of the UK COP26, said that, at this conference, he hopes that coal power is consigned to history. The UN has called upon the OECD ( Organization for Economic Cooperation and Development) countries to phase out coal by 2030, but environment ministers from the Group of 20 big economies have not agreed on a timeline.

Developed countries, in 2009, pledged to raise $100 billion per year till 2020 to assist developing countries in dealing with the effects of climate change.

According to the Organization for Economic Cooperation and Development, rich countries raised $79.6 billion for vulnerable countries in 2019, up 2 per cent from $78.3 billion in 2018.

Experts warn that if rich countries do not fulfil the $100 billion per year goal, faith in climate talks will erode.

The importance of carbon markets is addressed in Article 6 of the Paris Agreement.

Its progress stalled at the most recent talks in 2019 and has remained unresolved since the accord was signed. A centralised UN mechanism, which can trade carbon credits from emissions reductions generated from low-carbon projects has been on its agenda.

All nations have a responsibility to ensure that no one gets left behind and that changes are as fair as possible in the transition to a greener economy that's needed to address the climate crisis, European Commission for Climate Action Frans Timmermans said Monday.

Timmermans said current global economic models such as the significant reliance on fossil fuels will need to change to ensure a more equitable shift toward greener economies. But he said those changes shouldn't come at the cost of poorer nations' development.

“You can't go and say -- as developed countries -- to the developing world, Too bad for you. Time is over. We can't continue like this and you should keep living in misery so that I can be happy,” he said.

"You need to create a stable investment environment. You need to fight corruption. You need to make sure that it's interesting for foreign investors to come and share technology," he said.

Timmermans, a Dutch politician and diplomat, is also executive vice president of the European Union's Green Deal, a set of policy initiatives created by the European Commission to fight climate change by reducing greenhouse gas emissions by 55 per cent by 2030 compared to 1990 levels and making the EU carbon neutral by 2050.