Myanmar: 30 military troops killed in a clash in Sagaing

Ousted PM Win Myint testified against generals who forced him out 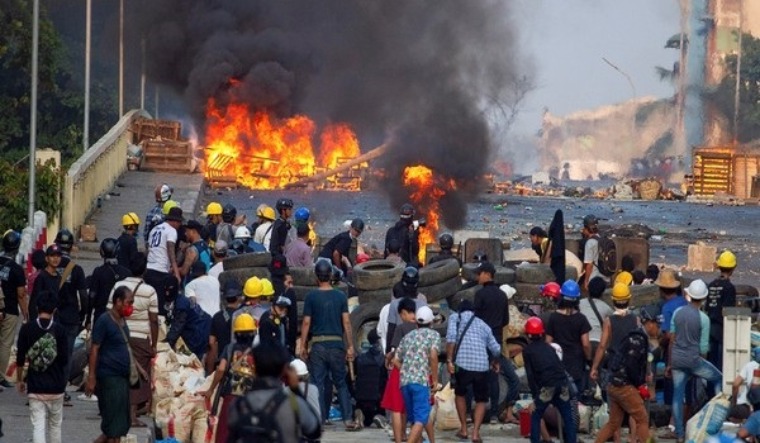 At least 30 government troops have been killed in clashes between Myanmar's military and People's Defense Force (PDF) militias in the Sagaing region, according to PDF sources. Meanwhile, allegations have risen of junta forces beating citizens and plundering their belongings.

According to PDF members, the event occurred on Monday when reinforced junta forces conducted a clearing operation in the townships of Pale, Yinmabin, Monywa, Mingin, Hteegyaing, and Chaung-Oo.

In the meantime, Myanmar’s civilian president, Win Myint, who was removed from office by the military in February this year, testified that the generals tried to force him to relinquish power hours before the coup on February 1. The military warned him that he could be seriously harmed if he refused, his lawyer told Reuters.

Win Myint appeared in court with Aung San Suu Kyi, the Nobel Peace Prize winner and de facto government leader before the coup, on charges of sedition and incitement, that has emerged from letters sent to embassies under their names, urging diplomats not to recognise military rule.

Myanmar's former president, Win Myint, told a court in the capital, Naypyidaw, that two top military officials approached him on February 1 and informed him that he needed to retire because of his health.

“The officers warned him the denial would cause him much harm but the president told them he would rather die than consent”. defence lawyer Khin Maung Zaw said. These were the first comments by Win Myint since he was ousted in February.

The country’s leader Aung San Suu Kyi is also due to testify later this month.

The generals have tried to justify the coup by alleging that the election was rigged, putting the country's sovereignty at risk. The election commission, on the other hand, found no evidence of wrongdoing in the poll.

On February 1, the vice president, Myint Swe, a former army officer, was inaugurated as president and promptly gave the military control over the state of emergency.