The payments will be going to approximately 6,500 survivors around the world 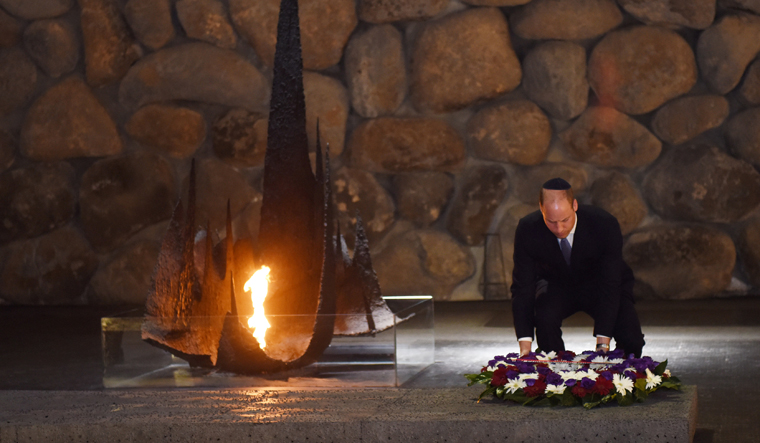 Britain's Prince William lays a wreath during a ceremony commemorating the six million Jews killed by the Nazis in the Holocaust, in the Hall of Remembrance at Yad Vashem World Holocaust Remembrance Center in Jerusalem | Reuters

The organisation that handles claims on behalf of Jews who suffered under the Nazis said Wednesday that Germany has agreed to extend compensation to Jewish survivors who endured the World War II siege of Leningrad and two other groups who had not received any monthly pensions from Germany.

The payments will be going to approximately 6,500 survivors around the world, primarily in Israel, North America, the former Soviet Union and Western Europe, according to the New York-based Conference on Jewish Material Claims Against Germany, also referred to as the Claims Conference.

The new funds are targeted toward about 4,500 Jews who survived the Leningrad siege during World War II, about 800 who lived mostly in hiding in France during the Nazi's terror reign, and some 1,200 Jewish survivors from Romania.

All of them will start getting a lifelong, monthly pension of 375 euros (USD 435) retroactively from July on.

This was a landmark breakthrough, Greg Schneider, executive vice president of the Claims Conference, said of the newly negotiated compensation arrangement with the German government.

For many of these people, it's the difference between deciding to pay the rent for the month or the medicines or buying food, Schneider said in a telephone interview from New York with The Associated Press.

One of recipients of the new monthly pension is Nonna Revzina, a 85-year-old woman who now lives in a Jewish senior citizen home in Berlin.

The retired librarian still remembers the beginning of the Leningrad siege by the Nazis in September 1941, when she was five years old. She still trembles when she recalls how she watched the events unfold from the sixth floor of her tenement building, when the city came under bombardment from Nazi forces, supply lines were cut off and hundreds of thousands died.
During an interview with the AP in her one-room apartment, Revzina wiped off her tears as she talked about her father, who died of hunger and illness during the siege in 1942, and whose body her mother took away on a sled to a place nearby where hundreds of dead bodies were piled up. She still does not know where her father was buried.

The siege of Leningrad, the Russian city now called St. Petersburg, lasted nearly 2 years until the Soviet Army drove away the Germans on Jan. 27, 1944.

Estimates of the death toll vary, but historians agree that more than 1 million Leningrad residents died from hunger or air and artillery bombardments during the siege.

But in addition to all of that, there were extra measures that the Germans did against Jews, Schneider said, such as the Nazis dropping leaflets into the city urging residents to identify Jews and throw them out or sending spies into the city to try create riots and then blaming that on the Jews.

"In the midst of this huge military battle, the Nazis were thinking not only about the Russians, not only about conquering Leningrad, but they were actually thinking about how to destroy the Jews and kill the Jews who were living in the city, Schneider said.

Revzina said she was well aware that had the Nazis conquered the city, all of us Jews would have been murdered immediately. The Russian woman immigrated to Germany in 1996, where her two adult children had moved a few years before her. In Berlin, Revzina helped raise her three grandchildren.

With the end of World War II now 76 years ago, Holocaust survivors are all elderly, and because many were deprived of proper nutrition when they were young today they suffer from numerous medical issues. In addition, many live isolated lives having lost their families in the war and also have a psychological burden due to their persecution under the Nazis.

Many Holocaust survivors came out of the war with nothing and are still impoverished today.

Part of the Claims Conference's annual negotiations includes working with Germany to expand the number of people eligible for compensation.

Some of the 6,500 survivors who will start getting pensions now already received one-time payments in the past but that will not bar them from receiving the new benefits, the Claims Conference said.

Since 1952, the German government has paid about USD 90 billion to individuals for suffering and losses resulting from persecution by the Nazis.

For Revzina, another 375 euros a month will allow her to enjoy the small pleasures of life that she wasn't able to afford.

The pension is very helpful for me, she said. "I like going to cafes. I can do that more often now. Her granddaughter Lana Solovej was thrilled about the new pension.

This is great news for her, said the 23-year-old university student, who often helps her grandmother with daily household errands. "The new pension will make a great difference for my grandmother".