Boxer Manny Pacquiao to run for Philippine presidency in 2022

'I will always be a fighter inside and outside the ring,' said Pacquiao 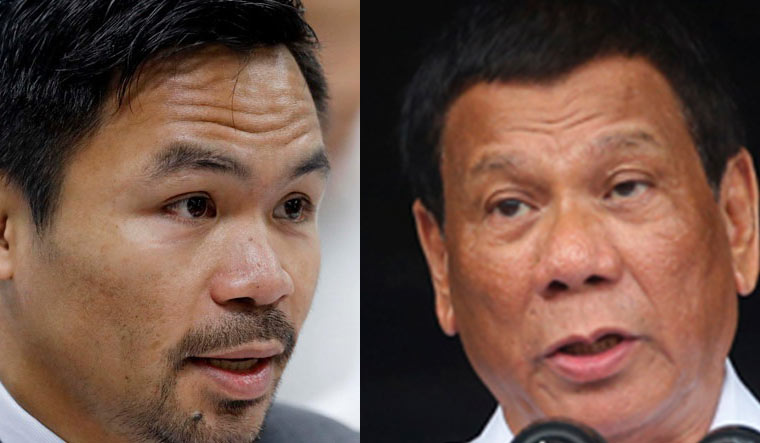 Philippine boxer Manny Pacquiao has said he will run for president of his country in the 2022 elections. The 42-year-old senator in the Philippines’ parliament was nominated by a faction of the ruling party PDP-Laban.

Pacquiao has been publicly critical of incumbent Rodrigo Duterte, who is barred by the Filipino constitution from running for a second six-year term as president. The two of them were once allies, but in recent months, Pacquiao has repeatedly accused Duterte of corruption.

The boxer’s announcement comes days after Duterte’s faction nominated the president’s close ally Christopher ‘Bong’ Go to succeed him. Though Go has declined the nomination, the party is asking him to reconsider his decision.

With Duterte ineligible to contest for the top post, his party had endorsed his bid to become the vice-president of the country, a move that has been heavily criticised. The widening rift between his and the Pacquiao factions had earlier resulted in the boxer being out-voted for the post of party president. Duterte is chairperson of the party.

At Sunday’s national assembly of the faction Pacquiao leads, he called out the president’s “cosy relationship” with China.

“I am a fighter, and I will always be a fighter inside and outside the ring,” said Pacquiao in a live-streamed speech. “I am accepting your nomination as candidate for president of the Republic of the Philippines.”

Pacquiao is considered to be one of the greatest boxers of all time. He is the only man to hold titles in eight different divisions. He holds a record of 62 wins, eight defeats and two draws. On August 22, he made a return to the ring after a two-year absence, but lost the bout to Cuba’s Yordenis Ugas in the welterweight division. Following the defeat, Pacquiao hinted that he was considering retirement from the sport for good. His focus is now firmly set on the anti-corruption campaign in his country.

Having been active in Filipino politics for over 10 years, he has waited patiently to become eligible to run for the presidency, as the country requires candidates to be at least 40 by the day of the election. Launching a corruption charge against Duterte earlier this year, Pacquiao said that more than 10 billion pesos ($200 million) in pandemic aid that had been reserved for poor families was currently unaccounted for.

Despite his popularity in the Philippines, Pacquiao is not expected to have it easy in the elections. Duterte’s daughter, Sara Duterte-Carpio, who is the mayor of Davao City and a top leader in her father’s faction, has been consistently leading the opinion polls.

Should the PDP-Laban block Pacquiao's bid for presidency, he could compete as an independent, which could then split the party's vote base. As things stand, it is unclear which of the two factions the electoral commission will recognise for the 2022 election.