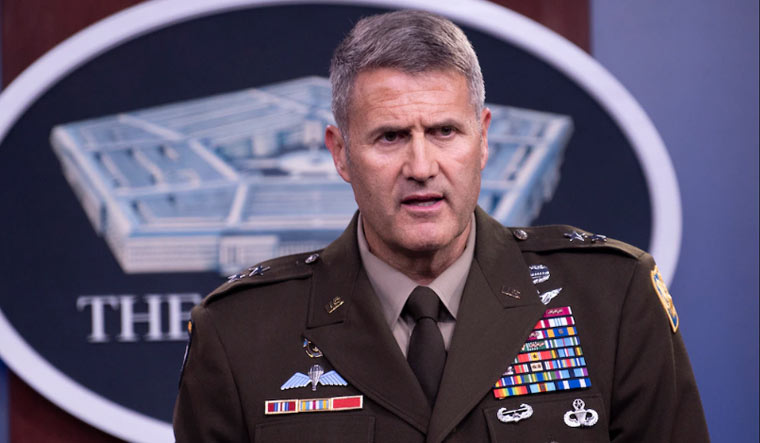 File photo of Maj Gen Hank Taylor, deputy director of the Joint Staff For Regional Operations | US Department of Defense

The US military said on Saturday that it carried out a drone strike in Afghanistan, killing two high-profile "planners and facilitators" of the Islamic State, hours after President Joe Biden promised to retaliate for the twin blasts at the Kabul airport that killed 169 Afghans and 13 American soldiers.

The Islamic State's Afghanistan affiliate, dubbed Islamic State Khorasan or IS-K, had claimed responsibility for the attack at the Hamid Karzai International Airport in Kabul on Thursday.

"Two high-profile ISIS targets were killed, and one was wounded. And we know of zero civilian casualties," Maj Gen Hank Taylor, deputy director of the Joint Staff For Regional Operations, told reporters on Saturday.

"Without specifying any future plans, I will say that we will continue to have the ability to defend ourselves and to leverage over the horizon capability to conduct counterterrorism operations as needed," he added.

The drone strike came a day after President Biden vowed to "hunt" down the terrorists and make them "pay" for the Kabul airport attack and ordered his commanders to develop plans to strike back at them.

"To those who carried out this attack, as well as anyone who wishes America harm notice, we will not forgive. We will not forget. We will hunt you down and make you pay. I will defend our interests and our people with every measure at my command," Biden had said in his remarks at the White House on Thursday.

Pentagon spokesperson John Kirby said all the targets were hit in a single strike, and that they were "IS-K planners and facilitators."

"The threats are still very real, they're very dynamic and we are monitoring them in real-time, Kirby told reporters about the possible additional attacks from the Islamic State group.

"Our mission to continue evacuating those as required and to meet the mission requirement by August 31 is what commanders are executing. We will maintain the ability to defend ourselves and our operations all the way through, Kirby said.

Earlier, Capt Bill Urban, spokesperson of US Central Command, said that the US military forces conducted an over-the-horizon counterterrorism operation today against an ISIS-K planner. The unmanned airstrike occurred in the Nangahar province of Afghanistan."

"Initial indications are that we killed the target. We know of no civilian casualties," Urban said on Friday.

Citing a defence official, CNN said the target was believed to be associated with potential future attacks at the airport.

On Friday, the White House said President Biden does not want the terrorists, who planned the attack at the Kabul airport, to live any longer.

"I think he made it clear yesterday that he does not want them to live on the Earth anymore, White House Press Secretary Jen Psaki told reporters at her daily news conference.

Meanwhile, the national security team of President Biden has told him that another terror attack is "likely" in Kabul and that the next few days of this evacuation mission will be the "most dangerous" period to date, according to a White House official.

This was shared with the President when he met in the Situation Room with his national security team, including top commanders and diplomats in the field.

"They advised the President and Vice President that another terror attack in Kabul is likely, but that they are taking maximum force protection measures at the Kabul Airport, the White House official said.

The official said the next few days of an evacuation operation, that has taken more than 100,000 people out of the country in the past two weeks, "will be the most dangerous period to date".

His national security team reported that even in the face of those threats, America's courageous servicewomen and men are continuing to operate a historic evacuation operation. The US military is airlifting out thousands of people every few hours.

They continue to prioritise evacuating the remaining American citizens who have indicated that they wish to leave, and are engaged in a variety of means to get them to the airport safely.

"The President directed the Secretary of State to continue diplomatic efforts with international partners to secure means for third-country nationals and Afghans with visas to leave the country even after the US military presence ends, said the official.

"The next few days of this mission will be the most dangerous period to date, said the official.