Smuggling of antiques, equipment out of Afghanistan will be dealt with legally: Taliban

In the last 40 years, several precious treasures were smuggled out of Afghanistan 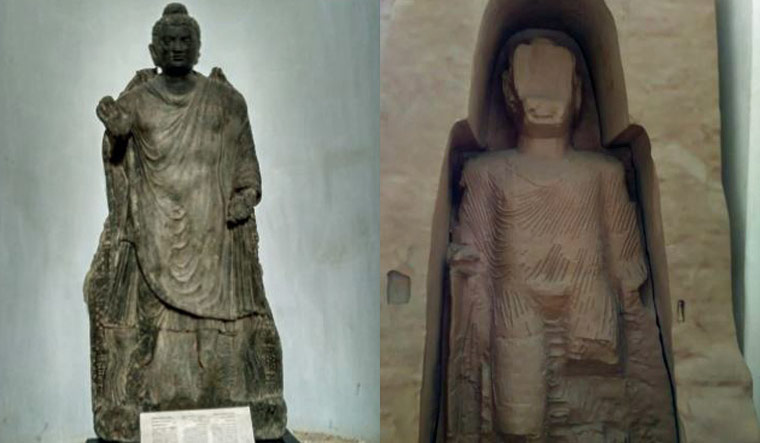 Yesterday, the Taliban announced that smuggling cash, equipment and antiquities out of the country would be an offence, and dealt with legally.

This is indeed a turnaround for the Taliban, under whose previous regime, ancient figures from pre-Islamic Afghanistan -- especially those from the Buddhist era of the country had been defaced or destroyed. The destruction of the massive Buddha statues in Bamiyan province shook the world in 2001. These statues, carved into the stark cliff sides, had stood for 1,500 years, witnessing the rise and fall of empires, till they fell. Bamiyan wasn't the only place where the Taliban had struck at the country's rich history. Its men had gone on a spree of destruction at the National Museum in Kabul, bringing out from the vaults (where the workers had carefully stashed away the treasure of artefacts to protect them from the relentless fighting since the Soviet times, and defacing artefacts that did not subscribe to their interpretation of Islam.

Taliban is repeatedly claiming that it is different from the earlier version of leaders, and the announcement on prohibiting smuggling out of antiquities appears to be an understanding that these are the country's treasures, even though they pre-date Islam. The present leadership has tried to distance itself from the Bamiyan disaster of 2001, though stopped short of apologising for the incident. In an earlier interview with this correspondent, spokesman Zabihullah Mujahideen had said that since there were no practising Buddhists in the country, the question of sorry didn't arise. And though he gave reassurance that Sikh and Hindu Afghans would be allowed to practise their faith, only a few days later, the Nishan Sahib of a gurudwara was pulled down by Taliban cadres, belying every assurance.

Taliban's recent interest in keeping the national antiquities within the country does not assuage the fear of their protection in the days to come. In the unfolding humanitarian crisis, the concern for Afghan's ancient treasures is not foremost, however, all those who have worked at excavating and restoring these artefacts are worried. Afghanistan is a treasure trove of antiquities, its arid climate is good for preserving them. While the treasures go back to prehistoric times, the richest haul is from the time that Buddhism dominated the land. It arrived during the Mauryan period and lasted till the advent of Islam. Afghanistan was on the important trade route - the Silk Route, and thus, had international influences from all over, the remnants of which can be seen in the artefacts left behind.

Till a few years ago, the Mes Aiyanak region of Logar Province, close to Kabul, was attractive for archaeologists and historians. Buddhist monastery, remnants of a Zorastrian temple and a trove of figurines and coins have been unearthed, and there is still so much more to discover there. The worsening security situation over the last years called an end to many of these excavation projects, but still, many artefacts were handed over to the museum.

During the last 40 years of turmoil, several precious treasures were smuggled out of the country. Over the last few years, hundreds of these artefacts were identified across the world and many returned to the museum. Kabul museum, despite the ravages of multiple wars, has an amazing collection of artefacts. Many of these were protected by the museum employees at risk to their own lives. The artefacts have travelled from the museum's vaults to those of ministries and even hidden in the erstwhile Kabul Hotel (now Serena Hotel). After the end of the Taliban regime, the museum got a facelift and its treasures back.