More than 2,000 Afghan army soldiers have fled to Tajikistan after Taliban offensive 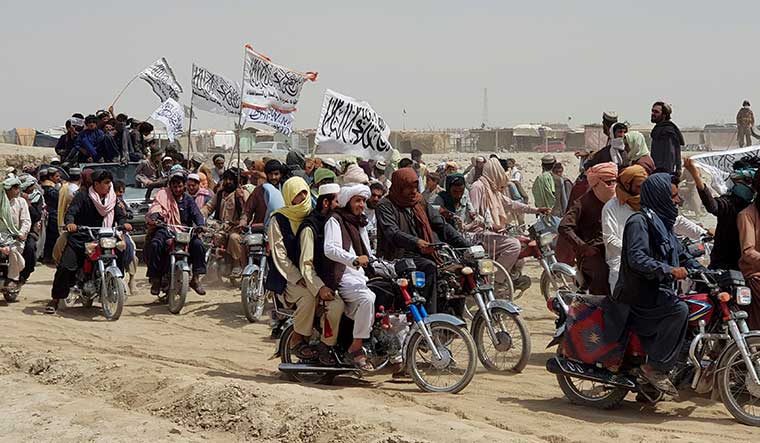 The leaders of Kazakhstan, Kyrgyzstan, Tajikistan, Turkmenistan and Uzbekistan met in Turkmenbashi on the Caspian Sea to talk about the regional challenges.

A quick settlement of the situation in Afghanistan is a key factor for preserving and strengthening security and stability in Central Asia, the five leaders said in a statement after the talks.

Turkmenistan's President Gurbanguly Berdimuhamedov noted that the talks give a boost to regional cooperation. The five presidents talked about expanding trade and economic ties between the countries of the region and spoke for establishing a permanent regional security dialogue.

The fighting between the Taliban and Afghanistan's government forces has escalated recently as US and NATO troops complete their pullout from the war-torn country. The Taliban currently control more than half of Afghanistan's 421 districts and district centres after pressing their offensive at unexpected speed and are aiming to seize provincial capitals.

The withdrawal of US and allied troops from Afghanistan has sharply exacerbated the military and political situation in the country, Tajikistan's President Emomali Rakhmon said during Friday's summit. Regrettably, the Taliban has taken control of the entire length of the border with our country.

Rakhmon said that more than 2,000 Afghan army soldiers have fled to Tajikistan facing the Taliban offensive. It's quite surprising that they retreated and abandoned their positions without offering any resistance to the Taliban, he added.

The Tajik president voiced concern about the concentration of terrorist groups in Afghanistan along the border with Tajikistan that number more than 3,000 militants from the ex-Soviet states and China.

These are extremists who are well-trained in sabotage, terrorism and propaganda activities and have far-reaching plans concerning our region, Rakhmon said, noting that Tajikistan has moved to strengthen the protection of its border with Afghanistan.

Uzbekistan's President Shavkat Mirziyoyev also emphasized that stability in Central Asia hinges on the situation in Afghanistan. The security and stable development depend on a political settlement in Afghanistan, Mirizyoyev said.

Russia, which has a security pact with Central Asian nations and military bases in Tajikistan and Kyrgyzstan, has vowed to provide military assistance to fend off any potential threats coming from Afghanistan.

Another military exercise by Russian, Tajik and Uzbek troops that began Thursday in Tajikistan near the border with Afghanistan involves 2,500 troops and 500 military vehicles.