Construction vehicles being used in rescue efforts in China floods 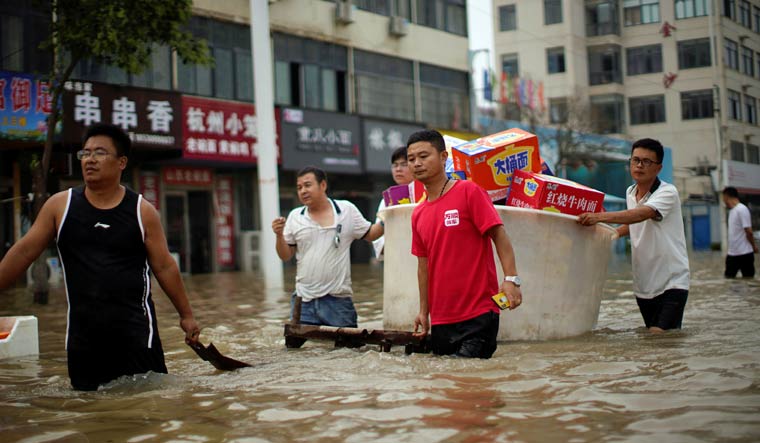 The death toll in central China's unprecedented flash floods triggered after the heaviest rainfall in 1,000 years has reached 33 with eight people missing, officials said on Thursday.

The torrential rain has affected about three million people in Henan province and a total of 376,000 residents have been relocated to safe places, the provincial emergency management department said.

The worst affected has been Zhengzhou, the capital city of the Henan province-- it received a year's equivalent of rains in just a few days. Workers driving construction vehicles are helping to rescue those stranded due to the rains and deliver food to those who are trapped.

Videos showed people trying to wade through floods in the downtown of the city while scores of cars and other vehicles washed away. Some videos also showed people falling into the massive cave-ins of the roads.

Rainwater poured into the subway tunnel of Zhengzhou's Line Five, trapping an unknown number of passengers aboard a subway train. Of the trapped passengers, 12 people were killed.

Heavy waterlogging has led to the virtual paralysis of the city's road traffic.

Over 80 bus lines have been suspended, more than 100 temporarily detoured and the subway service has also been temporarily suspended.

Police officers, firefighters and workers from the local sub-district have arrived at the site for the rescue operation, the report said.

The rains and the subsequent flooding has downed power supplies and as a result, people have been stranded at home, in offices and in public transport. Makeshift watercraft, like diggers trucks used by construction companies, are being used by rescuers and volunteers. Inflatable boats and rafts are also being used by rescuers to transport citizens to dry land. Tens of thousands of rescue workers, including the military, have been deployed across Henan. People have been using social media to speed up rescue efforts in Henan province. Users of Weibo, a social media platform have been connecting stranded citizens with professional rescue workers and other helpers. However, some posts requesting help have been taken down from Weibo.

When stories of rail lines being submerged emerged, social media users put up information of each train number and resources passengers in the trains need. Lists of critical contacts were also being put up.

Rains in Zhengzhou has been eased to a drizzle, but heavy rains are expected in parts of Henan.

Zhengzhou provincial weather bureau came under fire for a lack of warning, but, it had said it issued a forecast two days before.