Support has been pouring in for Guevara on social media 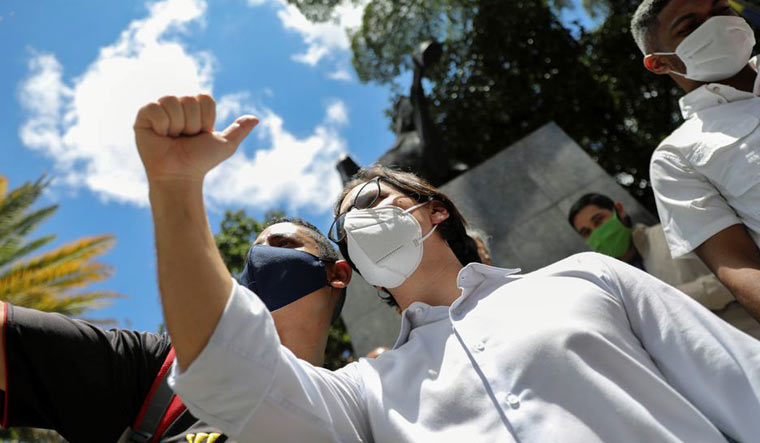 Lawmaker Freddy Guevara, who sought asylum in the Chilean diplomatic residence in Caracas, gestures during a public gathering after being pardoned by Venezuela's president Nicolas Maduro, in Caracas, Venezuela, September 9, 2020 | Reuters

The United Kingdom on Tuesday condemned the arrest of Venezuelan politician Freddy Guevara, a close ally of Juan Guaido. Guaido, the opposition leader, is recognized as Venezuela's legitimate president by the United States and some other nations.

Guevara, who was arrested on a highway in the capital city of Caracas has been charged with terrorism and treason among other allegations. Venezuela, on Wednesday, announced charges of terrorism against President Guaido too.

Guevara, former first vice president of the National Assembly of Venezuela, was in 2017, charged with instigating violence, was pardoned less than a year ago.

Support has been pouring in for Guevara on social media

“You can’t negotiate anything with a regime that terrorizes and jails its opponents. The international community should hit #Venezuela’s #Maduro regime hard for this outrage,” wrote Stephen Johnson, former deputy assistant secretary of defense for Western Hemisphere Affairs wrote on Twitter.

“Freddy is still missing. My thoughts are with his family in these times, and hoping this nightmare ends soon. #DondeEstaFreddyGuevara,” wrote another user on Twitter.

Guaido said, “Minutes after the dictatorship kidnapped Deputy Freddy Guevara, alleged officials of security organs, pointed long weapons and even triggering an explosive, they temporarily detained me and me members of my team in the basement of my residence." Guaido's wife Fabiana Rosales shared the interim President' statement on Facebook.

Monday. Venezuela's Attorney-General Tarek William Saab said Guevara would be charged with "the crimes of terrorism, attacks against the constitutional order, conspiracy to commit a crime and treason,” a BBC report reads. The prosecutor's office hasn't said where Guevara is being held. A spokesperson for Guaido's office said Guevara was taken to the Sebin intelligence service's Helicoide prison in Caracas.

On Monday, the US started easing trade sanctions the Trump administration imposed on Venezuela. The US and Venezuelan governments are gearing for talks to resolve the South American country's deep political crisis.

Venezuela's opposition, which has the backing of the US has alleged that Nicolas Maduro rigged the 2018 election and is using the justice system to repress dissent. Julie Chung, Acting Assistant Secretary for the US Department of State's Bureau of Western Hemisphere Affairs, urged the international community to join in condemning the acts and called for the release of all political prisoners in Venezuela.

Maduro has denied any interference in the elections and said that Guaido is conspiring a coup against him and called Guaido a US puppet.