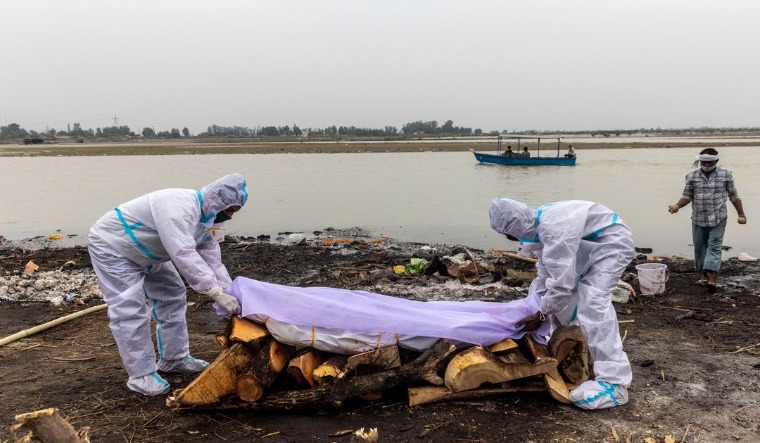 Men wearing protective suits place a white cloth over the body their relative, who died from the coronavirus disease (COVID-19), before his cremation on the banks of the river Ganges at Garhmukteshwar in the northern state of Uttar Pradesh, India, May 6 | Reuters

The global death toll from COVID-19 eclipsed four million Wednesday as the crisis increasingly becomes a race between the vaccine and the highly contagious delta variant.

The tally of lives lost over the past year and a half, as compiled from official sources by Johns Hopkins University, is about equal to the number of people killed in battle in all of the world’s wars since 1982, according to estimates from the Peace Research Institute Oslo.

Even then, the global toll is widely believed to be an undercount because of overlooked cases or deliberate concealment.

In recent weeks, the mutant delta version of the virus first identified in India has set off alarms around the world, spreading rapidly even in vaccination success stories like the US, Britain and Israel.

WHO has warned, that the highly transmissible delta variant could undermine efforts to contain the pandemic despite vaccination efforts.

At the same time, the disaster has exposed the gap between the haves and the have-nots, with vaccination drives barely getting started in Africa and other desperately poor corners of the world because of extreme shortages of shots. Indonesia continues to struggle to contain surging outbreaks—authorities are scrambling to get sufficient vaccine doses for its population.

United Nations Secretary-General Antonio Guterres on Thursday said, "Vaccines offer a ray of hope -- but most of the world is still in the shadows. The virus is outpacing vaccine distribution." Guterres calling for a global plan to boost vaccine production.

"To realize this plan, I am calling for an Emergency Task Force that brings together all the countries with vaccine production capacities, the World Health Organization, the global vaccine alliance GAVI and international financial institutions able to deal with the relevant pharmaceutical companies and manufacturers, and other key stakeholders," he said.

The variants, uneven access to vaccines and the relaxation of precautions in wealthier countries are “a toxic combination that is very dangerous,” warned Ann Lindstrand, a top immunization official at the World Health Organization.