CCP at 100: From rigours of membership to organisational structure, how the party operates 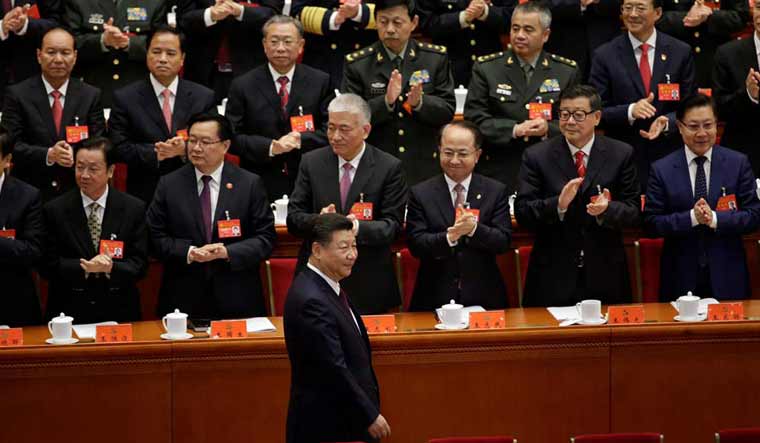 Founded in 1921, the Chinese Communist Party (CCP) sits at the very top of the power pyramid in the country, with a complete and unquestioned monopoly ever since the People’s Republic of China (PRC) was established after Mao Zedong overran the Kuomintang Nationalist Government. The party, under which the government and the People’s Liberation Army (PLA) operate, controls every single aspect of their citizens’ lives. So, how do the 90 million members-strong CCP—the second largest political party in the world after the BJP in India—operate? What is its organisational structure? In the 100 years of its existence—the anniversary celebrations are on July 1, 2021—how have the CCP managed to transform themselves into one of the most efficient setups in the world?

The CCP is now completely in the grips of Xi Jinping. Assuming power as the leader of the CCP and head of the Central Military Commission, the overall high command of the Chinese military besides the presidency, Xi, who carried out the biggest anti-corruption campaign purging over 1.5 million party officials, has firmly entrenched himself at the helm. The massive purge has also helped him to emerge as the “core” leader of the party, a status only enjoyed by Mao, putting himself ahead of the rest of the senior leaders, including number two Premier Li Keqiang. He also strengthened the People's Liberation Army with massive modernisation and reforms setting a deadline for it to emerge as the world's best army by 2027 on par with the US military.

The US-China Business Council put out a detailed document on the party leadership structure. At the national level, the CCP has mainly three main groups: the Central Committee, the Politburo, and the Politburo Standing Committee (PSC). The Central Committee, whose members are selected by the National Party Congress—held every five years—has over 370 members, the most out of the three. The Politburo—the chief political decision-making body in China—has more than 25 members who are chosen from the Central Committee. Politburo Standing Committee is the single most powerful arm of the CCP, with seven to nine members and consisting of names like President Xi and Premier Li.

Some of the other important organs of the CCP include the Party Central Military Commission (PCMC) that deals with the PLA, including senior appointments, troop deployments, and spending, a Central Secretariat (CS) that coordinates between various organisations to achieve tasks set out by the Politburo, a Central Committee on Discipline Inspection (CCDI) which enforces rules and fights corruption within the party, and Leading Small Groups which are ad-hoc, inter-agency consulting and coordinating bodies that provide direction for policymakers.

The National Party Congress mentioned earlier is an occasion where the top personnel are chosen, and policy priorities established for five years. Works conducted over the past five years are assessed, a realistic take on the current status is adopted, and guidelines are set for coming five years.

The rule for retirement from the party is “seven up, eight down”; no party member can/should (with rare exceptions) remain in power beyond the age of 68.

The party, an elite institution

There is an apocryphal but revealing anecdote on the rigours involved with getting a party membership. When he was young, President Xi had to apply for CCP membership over 10 times, being summarily rejected each time until he passed in the 11th try.

Being a party member has associated perks, from employment chances to networking and building connections. Yet, less than one out of ten are admitted to the party, making its entrance tests harder than some of the most prestigious universities in the world.

So, what is the recruitment process like? It remains notoriously opaque, but a couple of studies have thrown light on the matter. A report in JSTOR Daily stated that the CPC’s acceptance rate was on par with the US Ivy Leagues—two million applicants were accepted from a pool of 22 million—and an applicant’s family background, gender, rural or urban roots, academic performance, university ranking, and perceived loyalty all affect their chances. The report closely followed the cases of two fresh young recruits.

Initially, a handwritten application has to be submitted. The applicants will then be judged based on speeches they have to deliver on the history of the party, and stating their case for membership. If the applicant passes the initial tests, she will be subject to rigorous classes on the duties, discipline and structure of the organisation. At the same time, there will be detailed background checks on the person, followed by a party test—"a two-hour examination about Marxism, Mao Zedong thought, Deng Xiaoping theory, and other ideologies and histories the party holds dear”. If that test is passed, the applicant gets probationary membership.

As R.W. McMorrow reported in JSTOR, after one year, the probationary member has to reread her application to her comrades. “After reading, party members told her what they thought were her positive and negative traits, and then asked questions and criticised".

The party, which was predominantly made up of men and with over 30 per cent representation from fishermen, farmers and herders, is now even harder to break into under Xi. According to a detailed CCP analysis in Macro Polo, recruitments stunted under Xi. “He believed the CCP was growing too fast. Membership increased by an average of 2.4 per cent annually under Hu Jintao, who served as CCP General Secretary from 2002-2012. That trend reversed in Xi’s first five-year term, with membership growth declining every year from 2013 to 2017, averaging just 1 per cent (with a low of 0.1 per cent in 2017).”

From Mao to Xi

The party is now in the vice grip of President Xi, who is now considered the most influential leader after Chairman Mao Zedong. The party relies on Xi just as it depended on its founder leader and principled ideologue 'Chairman' Mao Zedong, who held on it until his death in 1976. On the brink of collapse after his disastrous ideological experiments like the 1958 “Great Leap Forward”, mass mobilisation of labour to improve agricultural and industrial production but ended with a string of poor harvests resulting in famine, and the 1966 'Cultural Revolution', which resulted in the deaths of over 1.5 million people, the party was revived by moderate “paramount leader” Deng Xiaoping.

Deng, who won the bitter power struggle against the 'Gang of Four' headed by Mao’s widow Jiang Qing and guided the party till 1997 had overturned Mao’s hardline Marxism, replacing it with a pragmatic ideology of “Socialism with Chinese Characteristics” and undoing the harm caused by Mao that helped China to unleash the potential of the world’s most populous country to emerge as the second-largest economy.

Deng’s other political invention of collective leadership structure which kept the party intact accommodating all groups and sections of the 90 million-strong member CPC after his death in 1997 has gone back to one leader party with the emergence of Xi at the helm in 2012.

China in 2018 approved the removal of the two-term limit on the presidency, effectively allowing Xi, 68, to remain in power for life.