The French exercises in French Polynesia ended on June 26 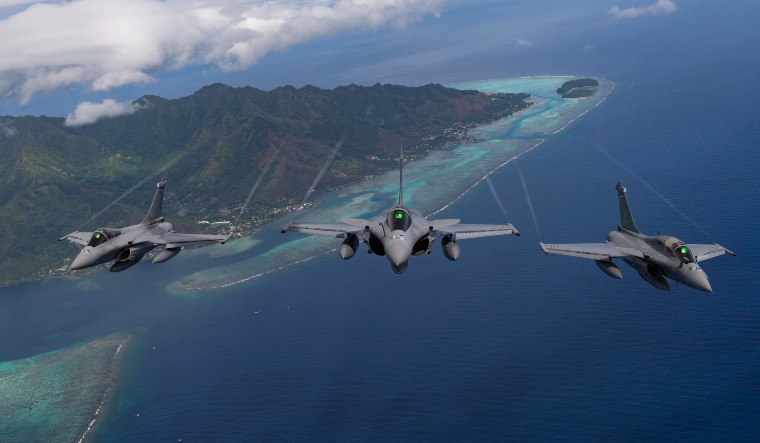 On Monday, multiple media reports in India claimed that the French Air Force had broken a record for continuous flying of its front-line Rafale fighters. The reports gave the impression the Rafale jets covered a distance of 17,000km in 12 hours straight while flying for an exercise in the Pacific.

Earlier this month, the French Air Force deployed a contingent of three Rafale fighters, complete with two A330 MRTT tankers and two A400M cargo aircraft, for an exercise in French Polynesia, an overseas collective of France, in the Pacific. The exercise, dubbed HEIFARA by the French ministry of defence, was intended to demonstrate France's commitment to the defence of French Polynesia.

BFM Business, a French website, reported on June 24 the entire duration of the journey from France to French Polynesia took 39 hours. BFM Business quoted Major Pierrick, an aerial refuelling operator, as claiming, "We are the only European country to be able to make this type of projection, 17,000 kilometres from our bases."

Apparently referring to the leg of the journey from France to California, BFM Business stated, "The record for continuous flight by a Rafale was even broken with twelve hours without landing, which required seven in-flight refuelling." In recent months, Rafale fighters being delivered to India have flown over 6,700km non-stop from France, supported by aerial refuelling.

The French exercises in French Polynesia ended on June 26, with the contingent moving on to Hawaii for exercises with US forces.

'Tactical' combat aircraft like the Rafale are not built for very-long-range missions. Such aircraft rely on aerial refuelling and halts to reach operating areas to minimise risk of equipment and engine damage and also crew fatigue… not to mention risk of accidents while flying long distances over water. Tactical combat aircraft typically have one or two engines (as is the case with the Rafale).

Longer-range 'strategic' bombers, such as the US B-2 or B-52, have performed non-stop combat missions that have lasted over 40 hours. Strategic bombers have significantly greater fuel capacity, more engines (up to four), allowing for greater redundancy in case of damage or malfunction to one unit, and options for crews to relax or relieve themselves.

For example, B-2 bombers have conducted bombing missions in Afghanistan, flying from and back to their bases in the US, with the mission lasting about 44 hours.