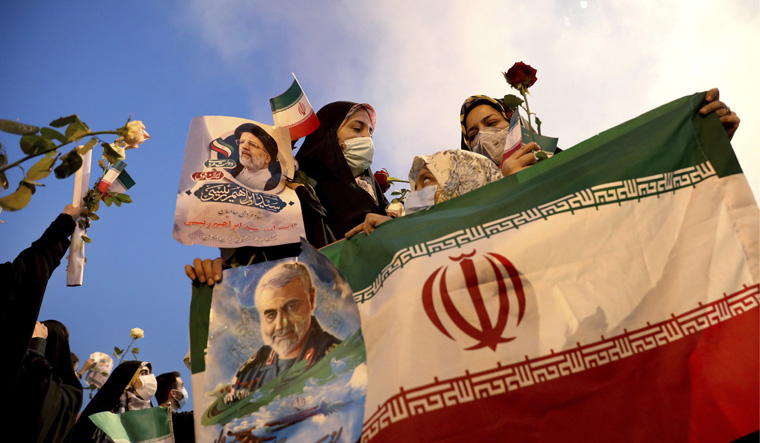 After a hardline judiciary chief won the Iranian presidential polls by a landslide margin, the US said that "Iranians have been denied their right to choose their leaders in a free and fair election process". News agency AFP quoted a US state department spokesperson as saying that the United States will nonetheless continue indirect talks with Iran on the US rejoining the 2015 nuclear accord. "Indirect talks in Vienna between the US and Iran had made meaningful progress and Washington wants to build on this," the spokesperson stated.

The election of Ebrahim Raisi, already sanctioned by the US in part over his involvement in the mass execution of thousands of political prisoners in 1988, became more of a coronation after his strongest competition found themselves disqualified from running.

That sparked calls for a boycott and many apparently did stay home out of over 59 million eligible voters, only 28.9 million voted. Of those voting, some 3.7 million people either accidentally or intentionally voided their ballots, far beyond the amount seen in previous elections and suggesting some wanted none of the four candidates.

Iranian state television immediately blamed challenges of the coronavirus pandemic and US sanctions for the low participation. But the low turnout and voided ballots suggested a wider unhappiness with the tightly controlled election, as activists criticised Raisi's ascension.

"That Ebrahim Raisi has risen to the presidency instead of being investigated for the crimes against humanity of murder, enforced disappearance and torture is a grim reminder that impunity reigns supreme in Iran," Amnesty International's Secretary-General Agnes Callamard said.

In official results, Raisi won 17.9 million votes overall, nearly 62 per cent of the total 28.9 million cast. Had the voided ballots gone to a candidate, that person would have come in second place. Following Raisi was former hardline Revolutionary Guard commander Mohsen Rezaei with 3.4 million votes.

Former Central Bank chief Abdolnasser Hemmati, a moderate viewed as a stand-in for outgoing President Hassan Rouhani in the election, came in third with 2.4 million votes. Amirhossein Ghazizadeh Hashemi was last with just under 1 million.