Who is Iran’s next president Ebrahim Raisi, accused of crimes against humanity?

Once scorned for posing next to a tattooed rapper, Raisi may rise further still 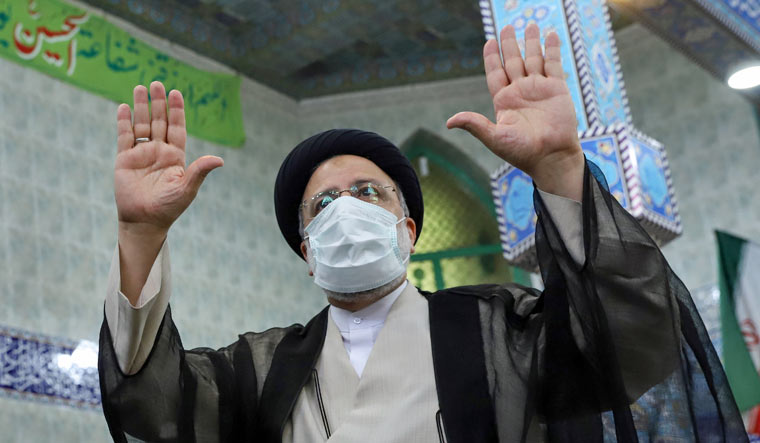 Upon being elected president, Ebrahim Raisi becomes the first Iranian leader to have already been sanctioned by the US before he could even take charge. And, shortly after his win was announced on Saturday, Amnesty International called for him to be immediately investigated for crimes against humanity.

The hardliner cleric becomes the first serving Iranian president to be sanctioned even before taking office: Washington had imposed sanctions on him in 2019 after he was appointed head of the country’s judiciary. That year, human rights lawyer Abdolkarim Lahiji described Raisi as “one of the most oppressive figures of the Islamic Republic during the past three or four decades”.

Born in 1960, Raisi attended a Shiite theological seminary in Qom until the age of 15 and has been criticised for not having formal non-religious education beyond the sixth grade. In donning a black turban, he claims descent from the Prophet Muhammad

In 1988, as deputy prosecutor general of Tehran, Raisi was part of the “death commissions” that ordered the executions of up to 5,000 political prisoners.

Iran has played down the matter of the killings, which were mostly of political opponents to the Islamic Revolution such as the leftist Mujahedin-e-Khalq group, the killings ever took place, while a 2020 United Nations special report found the contrary. The special rapporteur of that report, Agnes Callamard, is now Amnesty’s Secretary-General and issued the call for Raisi to be investigated for crimes against humanity.

In the anti-government protests of 2009 and 2019, Raisi played a role in the government’s crackdown of the same. However, despite his close ties to Ayatollah Khameini, Raisi was unable to prevail in the 2017 election, losing to the more moderate Hasan Rouhani.

Among the factors blamed for his loss was a video of Raisi sitting next to Iranian rapper Amir Hossein Maghsoudlou, AKA Amir Tataloo. With hardliner clerics often against music, and Raisi’s father-in-law having banned it in Mashhad, Raisi’s photo-op with the young, tattooed rapper was presented as a humorous contrast for Iranians, who mocked it with memes and giving him the same name as fans of the rapper, Tatalee.

Tataloo has since left the country. In 2017, his Instagram page was banned in the country after he issued a call for underage girls to join his harem.

Following Raisi’ victory, the Center for Human Rights in Iran has called on the international community to monitor the situation of the country.

Raisi served as prosecutor general of Tehran between 1989 and 1994. Also an Ayatollah, he was poised to succeed Supreme Leader Ayatollah Khamenei, who was his teacher. Both Raisi and Khamenei come from Mashhad and belong to its seminary. In 2019, citing Khamenei’s age and health, Al Jazeera identified Raisi as the most likely successor.

A hardliner cleric, Raisi campaigned on a promise to prosecute corrupt officials, construct four million new homes for low-income families and build a “government of the people for a strong Iran”.

However, his electoral victory was marred by widespread voter discontent, after Iran’s Guardian Council barred the leading “moderate” candidates from the election, all but securing Raisi’s victory. Up to 3.7 million “white” ballots—ballots without any candidates name written—were cast in this election as a seeming form of protest. Out of over 59 million eligible voters, only 28.9 million voted, with Raisi taking 17.9 million votes.

Raisi's election puts hard-liners firmly in control across the government as negotiations in Vienna continue to try to save a tattered deal meant to limit Iran's nuclear program, at a time when Tehran is enriching uranium at its highest levels ever, though still short of weapons-grade levels. Tensions remain high with both the U.S. and Israel, which is believed to have carried out a series of attacks targeting Iranian nuclear sites as well as assassinating the scientist who created its military atomic program decades earlier.

Since Raisi is on a US sanctions list (imposed during the Trump administration), the Biden administration may find it difficult to directly engage with him without repealing the sanctions, a politically fraught move. However, since the US maintains no diplomatic presence in Iran, negotiations to restore the nuclear deal continue to be held via intermediaries in Vienna.

Raisi has said on state television that he believes the “oppressive sanctions” on Iran should be lifted and that no effort should be spared.

Iranian presidents have almost all served two four-year terms. That means Raisi could be at the helm at what could be one of the most crucial moments for the country in decades—the death of the 82-year-old Khamenei. Speculation already has begun that Raisi might be a contender for the position, along with Khamenei's son, Mojtaba.