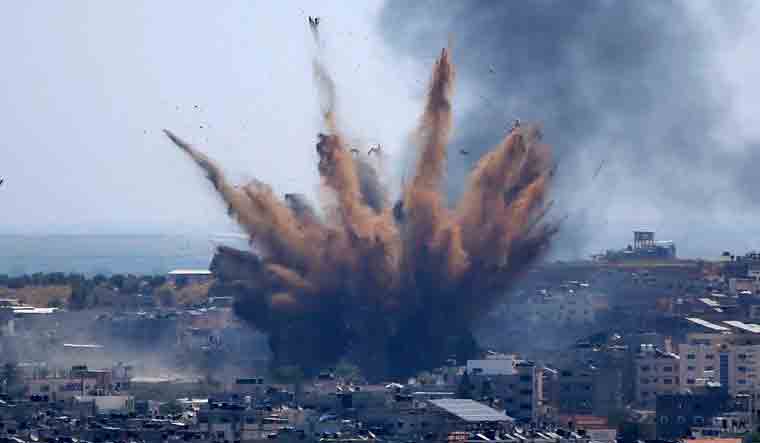 Israeli military’s ground and air forces are attacking Palestinian militants in the Gaza strip, as massive bombardment is being reported by residents amid fears that Israel would launch an incursion into the blockaded territory.

“(Israel Defense Forces) air and ground troops are currently attacking in the Gaza Strip,” the military, told The Guardian in a statement. There are no signs of conflict between the Palestinians and Israelis abating, as hostilities enter day five. Tensions had been brewing since May 6, when the Supreme Court of Israel upheld the decision to evict Palestinian families from Sheikh Jarrah, a neighbourhood annexed by Israel, but culturally significant to Arabs as it is home to al-Aqsa Mosque, a major Islamic holy site.

Israeli military affairs correspondents have said that it is not a ground invasion—this was confirmed by residents in northern Gaza, near the Israeli frontier.

According to data from Gaza’s health ministry, so far 109 Palestinians, have lost their lives, while, seven people have been killed in Israel due to rockets fired from Gaza.

Israel PM Benjamin Netanyahu tweeted, “The last word was not said and this operation will continue as long as necessary.” Netanyahu visited Lod, a city in central Israel, where there has been rioting and destruction of property.

The UNSC is expected to discuss the worsening violence between Israel and Palestinian militants on Sunday. People living in the line of the crossfire are seeking shelter in UN-run schools, Reuters reported. In areas where both Arabs and Israelis live, Synagogues are being attacked and fights have been breaking out on the streets. Incidents of inter-communal violence like beatings, arson, has been reported from Beersheba in the southern Negev to Tiberias and Haifa in the north.

People have been screaming in terror due to deafening blasts from the outskirts of Gaza.

Israel was “building up forces on the Gaza border”, Zilberman added-- a deployment that raised speculation about a possible ground invasion, similar to conflicts in 2009 and 2014.

Israeli military affairs correspondents have said however that a major ground incursion is unlikely, citing high casualties among the risks.

Hamas armed wing spokesman Abu said, “Mass up as you wish, from the sea, land and sky. We have prepared for your kinds of deaths that would make you curse yourselves.” Hamas has also been launching suicide drones, that lock in on a target before releasing explosives. Warning sirens are sounded almost consistently in towns near the border.

As per the Israeli military, so far,1,750 rockets have been fired at Israel. Of these, 300 fell short in the Gaza Strip.