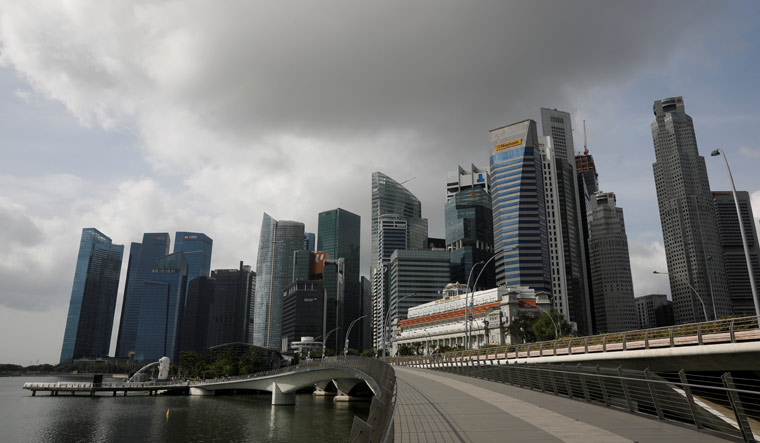 Singapore’s Prime Minister Lee Hsien Loong has condemned the incident where a 30-year-old man allegedly kicked a 55-year-old Singaporean woman of Indian origin in the chest in what was said to be a racially-motivated attack.

According to local media reports, the man assaulted the woman as she was brisk walking with her mask pulled below her nose. Hindocha Nita Vishnubhai, a private tutor, was brisk walking on Friday morning when a man approached her and asked her to pull the mask up from her chin before hurling vulgarities and racial slurs at her.

"My mum responded with a 'God bless you' and the guy kicked her in the chest. My mum landed on her back and hurt herself," the victim's daughter had told a local news channel.

Singapore has made wearing of face masks in public mandatory, but these can be removed during exercise including brisk walking.

Prime Minister Lee said that while people may be anxious or stressed due to the COVID-19 pandemic, “That does not justify racist attitudes and actions, much less physically abusing and assaulting someone because she belongs to a particular race, in this case Indian.”

The Singapore police say a 30-year-old man was arrested for public nuisance, uttering words with intent to wound the racial feelings of others and voluntarily causing hurt.

Singapore will fail if it allows racism, xenophobia: minister

Singapore will fail if it allows racism and xenophobia to become prevalent, a senior minister warned on Tuesday in response to the incident.

Ministers warn of dangers of growing xenophobia against Indians

Addressing parliament on the issue, Minister for Law and Home Affairs K. Shanmugam said such racist behaviour cannot be justified by saying, the Indians are behaving badly or blamed on the government policies such as the India-Singapore Comprehensive Economic Cooperation Agreement (CECA), a free trade agreement signed in June 2005.

"There have been several canards about CECA, promoted by a whispering campaign,” he said, adding that any lawmaker who believed the agreement was a problem could put up a motion to hold a debate.

The alleged assault of the woman, which is currently being investigated by the police, drew condemnation from several ministers, including Prime Minister Loong, who said it goes against everything that our multiracial society stands for.

Such behaviour should be condemned, said Shanmugam. Singapore has been able to manage racism and over time sought to reduce it, he said.

Around the world economic pressures have led to populism and the populists have been seeking political profit by exploiting people's fears over jobs and economic insecurity, blaming foreigners, blaming immigrants, for all of their country's problems, the Channel News Asia quoted the minister as saying.

"Singapore is 725 sq km of rock. We have to make a living by being open to the world. We will fail if we allow racism and xenophobia to become prevalent, and it's contrary to everything that has made us successful and proud to be Singaporean,” the minister warned.

While Singapore has avoided the worst of such populist attitudes, there are legitimate concerns about foreigners taking jobs from locals, said Shanmugam, adding that these concerns have been fuelled by unacceptable practices like unfair employment practices that favour hiring foreigners and discriminate against the locals.

"It is a minority who behave like this, but it naturally makes Singaporeans unhappy, he said, adding that the Manpower Ministry has taken steps to deal with such practices.

Shanmugam said certain parties, which he did not identify, were deliberately stoking the fears, encouraging racism and xenophobia, and dog whistling, asserting that it is dangerous for Singapore.

First, it will be the expat Indians. Then, it will come to Singaporean Indians, he said, noting that not all would be able to distinguish between India-born in Singapore and those born overseas.

The lady who was attacked has been a citizen for 25 years. If we go down this route, eventually all Indians can be a target of hate, he said, warning that this could create an outgroup based on race.

The majority of Singaporeans are decent and not racist, but if we continue to fan the flames of racism, we will get to a more uncomfortable position, he said.

“We should be ashamed that in the name of free speech, we allow such comments. This bad behaviour and open expression of racism I invite all here to condemn,” he said.

He singled out Non-Constituency Parliamentarian Leong Mun Wai, who previously said he was deeply disappointed that DBS Bank did not have a homegrown chief executive and whose Progress Singapore Party (PSP) had called for agreements such as CECA to be reviewed. DBS Group CEO is Piyush Gupta of Indian-origin.

I hope responsible opposition parties will take a stand on this, notwithstanding that many of these sites that promote xenophobia support you, Shanmugam said.

Leong later responded by saying neither he nor the Progress Singapore Party were xenophobic.

“We are just stating the economic effects (that) some of these free trade agreements have had on our economy,” he said, adding he intended to take up the challenge from Shanmugam for a debate at an appropriate time in the future.

Leader of the Opposition Pritam Singh said his Workers' Party was in agreement with Shanmugam's statement.

“There is no place for racism in Singapore—no ifs, no buts, he said.