Pope Francis has joined calls for an end to the violence, invites parties to talks 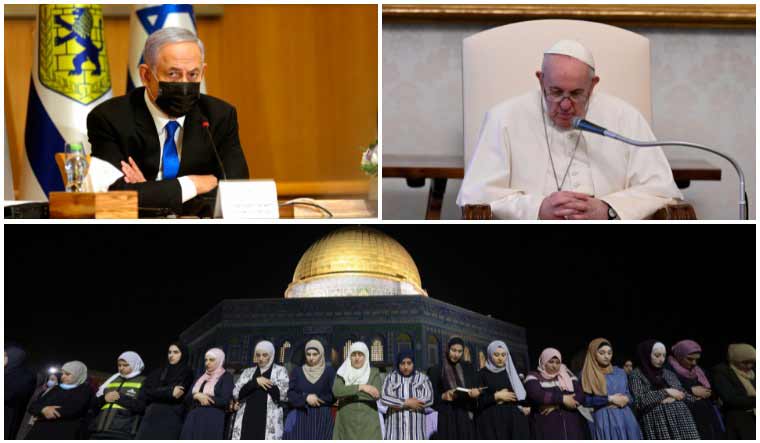 Collage (Clockwise from top): Israeli Prime Minister Benjamin Netanyahu at a special cabinet meeting on the occasion of Jerusalem Day, Pope Francis during his address in Rome on Sunday, Palestinians praying on Laylat al-Qadr during the holy month of Ramadan, at the compound that houses Al-Aqsa Mosque, known to Muslims as Noble Sanctuary and to Jews as Temple Mount, in Jerusalem's Old City | AP, Reuters

Following incidents between Israeli police and Palestinian protesters at and around the Al-Aqsa mosque that left over 150 injured, Pope Francis has called for an end to violence in Jerusalem.

Telling pilgrims at Saint Peter Square in Rome, the Pope invited called for peace and  invited parties to seek solutions in order to respect the multicultural identity of the Holy City.

Over 200 have been injured over the weekend as Israeli police fired rubber bullets and stun grenades at Palestinian youth at Jerusalem’s Al-Aqsa Mosque. The protestors had gathered over the potential eviction of Palestinians from homes on lands claimed by Jewish settlers, as Israel moves ahead with its plan to evict Palestinian families.

Tensions have flared in Sheikh Jarrah after an eviction order was made, prompting police to enter the historic Al-Aqsa Mosque to clear it of protesters.

On Friday, at least 205 people were injured in clashes between Palestinians and police officers.

Nightly protests have been taking place in East Jerusalem's Sheikh Jarrah neighbourhood where numerous Palestinian families face eviction in a long-running legal case. Many have stayed on to protest the eviction.

In the clash that broke out after the evening meal break at Ramadan at Al-Aqsa, protestors hurled rocks, fireworks and other objects, injuring six police officers.

Israel's Supreme Court will hold a hearing on the Sheikh Jarrah evictions on Monday. Palestinian President Mahmoud Abbas said he “held (Israel) responsible for the dangerous developments and sinful attacks taking place in the holy city» and called on the UN Security Council to hold an urgent session on the issue.”

Israel's military said it would send additional combat troops to the West Bank.

"We call on Israeli and Palestinian officials to act decisively to deescalate tensions and bring a halt to the violence," Price added.

Sheikh Jarrah might have a majority of Palestinian residents, but the area also contains a  site revered by religious Jews as the tomb of an ancient high priest, Simon the Just.

“We call on Israel to immediately halt all forced evictions, including those in Sheikh Jarrah, and to cease any activity that would further contribute to a coercive environment and lead to a risk of forcible transfer,” a spokesman for the UN High Commissioner for Human Rights Rupert Colville told CNN.

However, Israeli Prime Minister Benjamin Netanyahu has remained adamant on the resettlement.

"We firmly reject the pressure not to build in Jerusalem. To my regret, this pressure has been increasing of late," Netanyahu said during a televised address ahead of national commemorations of the Israeli capture of East Jerusalem in a 1967 war.