As COVID-19 infections grow on Everest base camp, China aims to limit contact 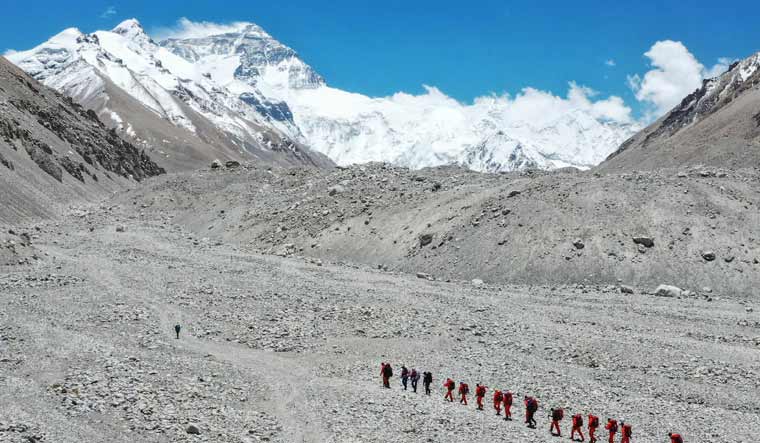 File photo: Chinese surveyors hike toward a higher spot from the base camp on Mount Qomolangma at an altitude of 5,200 meters | AP

Amid reports of dozens of COVID-19 cases among climbers at the Everest base camp (reports Nepal has denied), China has moved to create a “line of separation” at the summit” to prevent climbers from COVID-19 hit Nepal from mingling with those from the Chinese side.

Chinese state media on Sunday said a group of 21 Chinese nationals is en route to the summit on the Tibetan side, and will set up the line of separation at the summit to stop contact between mountaineers from both sides of the peak.

Mount Everest lies on the border between Tibet and Nepal. China administers Mount Everest along with Nepal. The size of the summit itself is just around that of a dining table.

In this year’s climbing season, a record 408 permits to climb were issued. However, with the surge in the number of climbers, came a wave of infections. With Nepal reporting nearly 9,000 cases of COVID on Sunday, multiple reports of a coronavirus outbreak at the Everest base camp have emerged.

While the Nepal Mountaineering Association has confirmed four cases, mountaineers claim over 30 have been evacuated from the camp. Base camp officials have said they received reports of 17 confirmed cases from climbers who flew out of Everest.