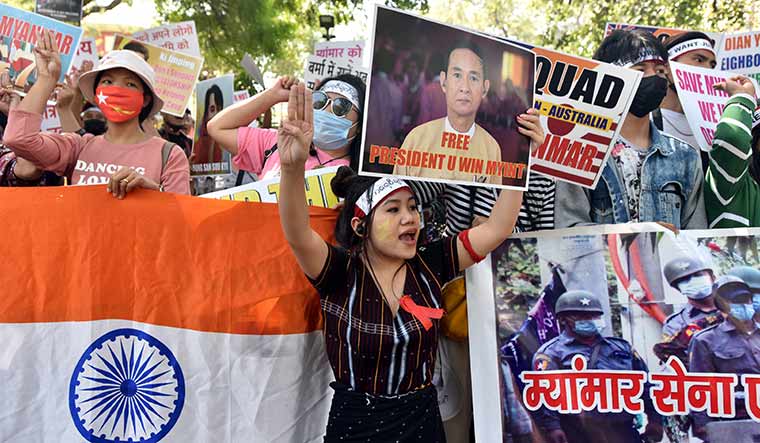 Warriors for democracy: A protest in Delhi against the coup in Myanmar | Getty Images

India has welcomed the ASEAN five-point consensus on Myanmar, which calls for an immediate cessation of violence in the country and that all parties shall exercise utmost restraint, as New Delhi reiterated its call for the release of detained leaders.

Myanmar's military seized power on February 1 after overthrowing the elected government led by Aung San Suu Kyi and declared a state of emergency. Suu Kyi is among an estimated 3,400 people still being held by the junta.

India's stand was expounded when the 15-nation UN Security Council held a private meeting in connection with Myanmar on Friday.

India's Permanent Representative to the UN Ambassador T S Tirumurti later tweeted that in the Council, he said India welcomes the Association of Southeast Asian Nations' initiative and five-point consensus.

He added that India will strengthen ASEAN's efforts; the Security Council and the UN should support their efforts.

He added that India continues to insist on the release of detained leaders and end to violence and that New Delhi's overall stand on the situation is consistent.

The ASEAN five-point consensus states that there shall be an immediate cessation of violence in Myanmar and all parties shall exercise utmost restraint; constructive dialogue among all parties concerned shall commence to seek a peaceful solution in the interests of the people.

It said a special envoy of the ASEAN Chair shall facilitate mediation of the dialogue process, with the assistance of the Secretary-General of ASEAN; ASEAN shall provide humanitarian assistance through the AHA Centre (ASEAN Coordinating Centre for Humanitarian Assistance on disaster management); and the special envoy and delegation shall visit Myanmar to meet with all parties concerned.

India has condemned the violence in Myanmar and condoled the loss of life, as it urged maximum restraint and called for the release of detained leaders, emphasised the situation to be resolved peacefully and underlined its steadfast commitment to democratic transition.

The UN Development Programme (UNDP) said in its report, 'COVID-19, Coup d'etat and Poverty: Compounding Negative Shocks and their Impact on Human Development in Myanmar' that the ongoing political crisis will "doubtless, further compound the socioeconomic impact of the pandemic, reducing incomes.

In the worst-case scenario, nearly half of the population of Myanmar (48.2 per cent) will live in poverty (compared to the 24.8 per cent in 2017), reversing gains made since 2005, the report said.

It said if the situation on the ground persists, the poverty rate could double by the beginning of 2022.

By then, the shock from the crisis will have resulted in significant losses of wages and income, particularly from small businesses, and a drop in access to food, basic services and social protection.

UNDP Administrator Achim Steiner said that in the space of 12 years, from 2005 to 2017, Myanmar managed to nearly halve the number of people living in poverty.

However, the challenges of the past 12 months have put all of these hard-won development gains at risk. Without functioning democratic institutions, Myanmar faces a tragic and avoidable backslide towards levels of poverty not seen in a generation.

The situation worsened further with the February 1 military coup and the ensuing security and human rights crisis, with projections indicating a further 12 per cent point increase in poverty as a result.

In the nearly three months since, over 750 people including children are reported to have been killed by security forces in a brutal crackdown on pro-democracy protests, countless more have been wounded and thousands arrested, the report added.