The route could significantly reduce distances for global trade 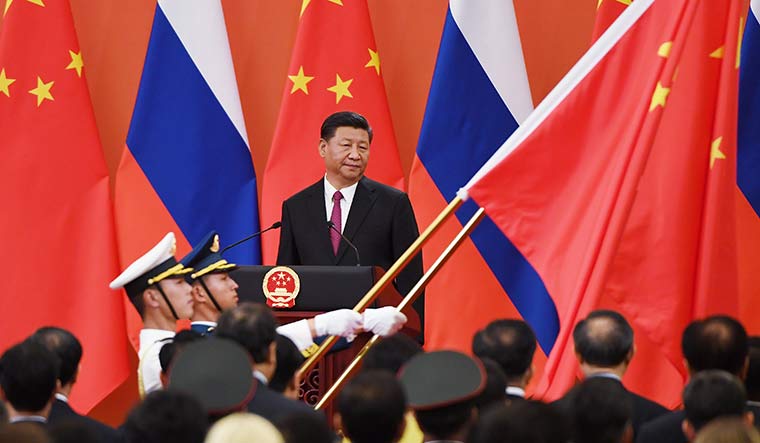 Under pressure: China’s President Xi Jinping looks on as soldiers carry the Chinese flag during a medal presentation ceremony in Beijing | Getty Images

As the ice-covered parts of the Arctic Ocean melt due to climate change, China has flagged its interest to take part in building "Polar Silk Road", raising prospects for the emergence of a new sea route.

China will participate in the pragmatic cooperation on the Arctic and the building of a "Polar Silk Road," the state-run Xinhua news agency quoted the draft outline of the 14th Five-Year Plan (2021-2025) for national economic and social development and the long-range objectives to the year 2035.

Both the plans were submitted to China's National People's Congress (NPC), the country's Parliament which began its annual session here on Friday.

Connecting the Atlantic and Pacific oceans, the Transpolar Sea Route (TSR) will cut across the centre of the Arctic Ocean, passing close to the North Pole.

While it could significantly reduce distances for global trade, it remains frozen over for most of the year, making it much harder to traverse than the two Arctic shipping routes currently available  the Northern Sea Route and the Northwest Passage, the Hong Kong-based South China Morning Post quoted a research paper earlier.

"To the best of our knowledge, China is the only country to have led official expeditions of all three Arctic shipping passages, including the TSR, the research team, led by Dr Mia Bennett from the University of Hong Kong, wrote in the paper.

China has made clear its intention to expand in the Arctic region and published a white paper on this in early 2018 calling for its transformation into a Polar Silk Road and highlighting its plans to integrate with its multibillion-dollar Belt and Road Initiative (BRI).

China unveiled the BRI in 2013 with an aim to link Southeast Asia, Central Asia, the Gulf region, Africa and Europe with a network of land and sea routes.

India has been severely critical of the BRI, the pet project of Chinese President Xi Jinping, as the $60 billion China Pakistan Economic Corridor (CPEC), which is part of the BRI, passes through Pakistan-occupied Kashmir (PoK).