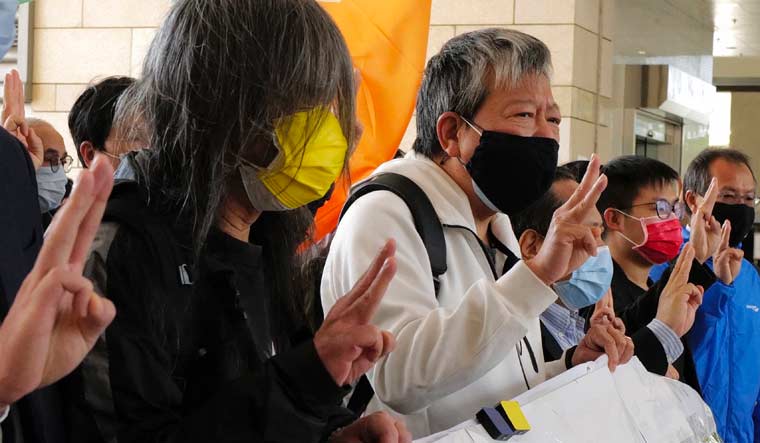 The nine Hong Kong activists on trial include some of the city’s fiercest pro-democracy campaigners and have campaigned for universal suffrage for decades. They have also been advocates of non-violence. Among them are Martin Lee, an 82-year-old barrister who was once chosen by Beijing to help write Hong Kong's mini-constitution, and Margaret Ng, a 73-year-old barrister and former opposition lawmaker, an AFP report reads.

The trial that began on Tuesday is expected to last ten days. One of the leaders being tried for being a dissident, Leung Kwok-hung shouted, “Assembly is not a crime, oppose political prosecution.”

Currently media tycoon and a supporter of the pro-democracy movement, Jimmy Lai is under custody. Lai is among the leaders who are on trial. If convicted, the leaders could face up to five years in prison.

Under the national security law imposed in July 2020, protests in Hong Kong can go ahead only with permission of authorities— this has long been criticised by rights groups.

The prosecutors in their opening statement accused the lawmakers of defying police instructions and leading the march that caused traffic disruptions. Since the passage of the national security law in July 2020, Beijing has been arresting and prosecuting pro-democracy leaders who organised protests in 2019 and has been charging them with dissent.