What does the three-finger salute being used by protestors in Myanmar mean?

The salute is a symbol of resistance 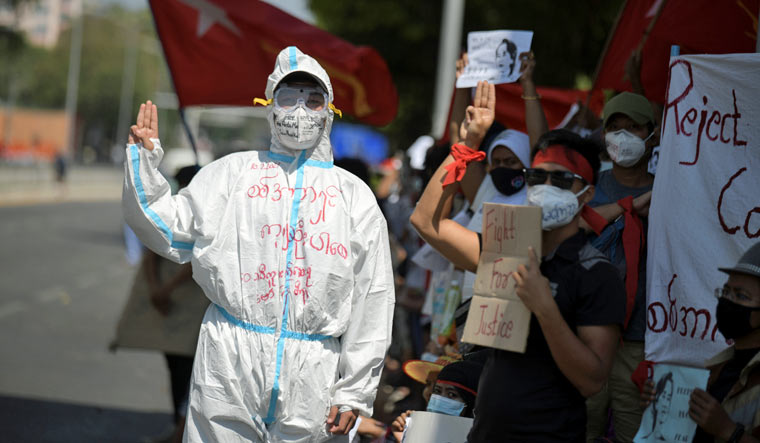 A person wearing personal protective equipment (PPE) flashes a three-fingers salute as he rallies against the military coup and to demand the release of elected leader Aung San Suu Kyi, in Yangon, Myanmar | Reuters

Protesters are thronging streets of Myanmar for the sixth consecutive day. Protests began after the military on February 1, ousted leader of National League of Democracy Aung San Suu Kyi, ending civilian rule. Military General Min Aung Hlaing has taken over. The General justified the coup and said, the elections in November, where Suu Kyi's party won by a landslide was fraudulent.

The protestors have adopted the three-finger salute as they march streets of cities like Naypyidaw, Mandalay and Yangon. The salute, where three middle fingers are raised was used by medical protestors against the coup— it eventually caught on.

The salute is a symbol of resistance and is used in solidarity by people repressed in a tyrant regime. The three-finger salute has been seen in the Hunger Games movies based on books by Suzanne Collins. In the movies and books, the salute meant several things— a gesture to mean thanks, admiration and good-bye to someone they love. It has now snowballed into a symbol of uprising against wealthy, totalitarian overlords.


The salute was used in 2014, by protesters who were against the coup and takeover by Thailand's Military leader Prayut Chan-o-cha. He overthrew Yingluck Shinawatra, the country's first female prime minister. Shinawatra is a member of the Pheu Thai Party.