'We will lead by power of our example': Biden's foreign policy promises

"America has been tested and we've come out stronger for it," he said 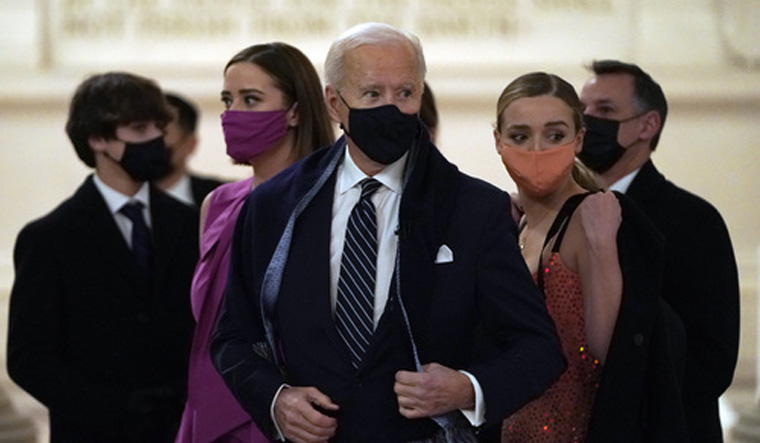 President Joe Biden addresses the nation at the Celebrating America concert at the Lincoln Memorial in Washington, Wednesday | AP

US President Joe Biden on Wednesday vowed to repair America's alliances and engage with the world once again, saying the country has been tested and its people have come out stronger.

In his inaugural speech after being sworn in as the 46th president of the United States in a historic but scaled down ceremony under the unprecedented security umbrella of thousands of security personnel, the 78-year-old veteran Democratic leader said: "We will be a strong and trusted partner for peace, progress and security."

"Look, folks, all of my colleagues I have served with in the House and the Senate up here, we all understand the world is watching, watching all of us today, so here is my message to those beyond our borders."

"America has been tested and we've come out stronger for it. We will repair our alliances and engage with the world once again, not to meet yesterday's challenges but today's and tomorrow's challenges. We will lead not merely by the example of our power, by the power of our example. We'll be a strong and trusted partner for peace, progress, and security," Biden said.

He told his fellow Americans that this is a time of testing.

"We face an attack on our democracy and on truth, a raging virus, growing inequity, the sting of systemic racism, a climate in crisis, America's role in the world. Anyone of these would be enough to challenge us in profound ways, but the fact is we face them all at once, presenting this nation with one of the gravest responsibilities we had."

"Now we're going to be tested. Are we going to step up, all of us? It's time for boldness for there is so much to do. And this is certain. I promise you, we will be judged, you and I, by how we resolve these cascading crises of our era," Biden said.

"We will rise to the occasion is the question. Will we master this rare and difficult hour? Will we meet our obligations and pass along a new and better world to our children? I believe we must. I'm sure you do as well. I believe we will, he said.

And when the country says, the US will write the next great chapter in the history of the United States of America, the President said.

Biden said that recent weeks and months have taught the US a painful lesson.

"There is truth and there are lies, lies told for power and for profit, and each of us has a duty and a responsibility as citizens, as Americans and especially as leaders, leaders who have pledged to honour our Constitution and protect our nation, to defend the truth and defeat the lies," he said.

Acknowledging that many of his fellow Americans view the future with fear and trepidation, he said that he knows they worry about their jobs.

I understand like my dad they lay at bed staring at the night -- staring at the ceiling wondering can I keep my healthcare, can I pay my mortgage? Thinking about their families, about what comes next. I promise you I get it, but the answer is not to turn inward, to retreat into competing factions, distrusting those who don't look like you or worship the way you do or don't get their news from the same source as you do.

We must end this uncivil war that pits red against blue, rural versus urban, conservative versus liberal. We can do this if we open our souls instead of hardening our hearts if we show a little tolerance and humility and if we are willing to stand in the other person's shoes as my mom would say just for a moment stand in their shoes because here's the thing about life, there's no accounting for what fate will deal you, Biden said.

Many world leaders, including Prime Minister Narendra Modi, have tweeted their congratulations to the new administration and expressed their optimism at working together.

"My warmest congratulations to Joe Biden on his assumption of office as President of the United States of America. I look forward to working with him to strengthen India-US strategic partnership," Modi said.

"My best wishes for a successful term in leading USA as we stand united and resilient in addressing common challenges and advancing global peace and security," he said in a series of tweets.

Noting that the India-US partnership is based on shared values, Modi said the two countries have a substantial and multi-faceted bilateral agenda, growing economic engagement and vibrant people to people linkages.

"Committed to working with President Joe Biden to take the India-US partnership to even greater heights," the prime minister said.

The inauguration was held under the watch of more than 25,000 National Guards, who have transformed the capital into a garrison city, mainly because of the threat of more violent protests by the supporters of outgoing President Donald Trump, who became the first president to skip his successor's inauguration since Andrew Johnson in 1869. Outgoing Vice President Mike Pence attended the ceremony.