With two days left for Biden inauguration, US Capitol briefly put under lockdown 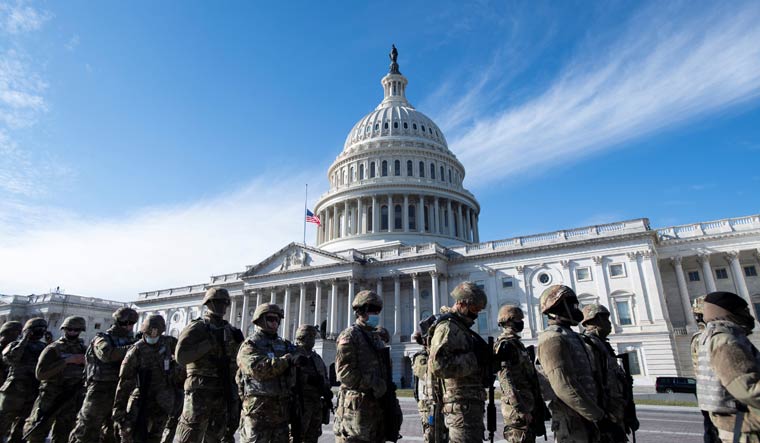 Members of the U.S. National Guard arrive, as the U.S. Capitol goes into lockdown during the dress rehearsal ahead of U.S. President-elect Joe Biden's inauguration in Washington, U.S., January 18, 2021 | Rod Lamkey/Pool via REUTERS

The Capitol Hill, the complex comprising of US Congress and its buildings, was briefly put under lockdown on Monday due to "an external security treat", local police said after a fire was reported a few blocks away.

"All buildings within the Capitol Complex: External security threat, no entry or exit is permitted, stay away from exterior windows, doors. If outside, seek cover," US Capitol Police said in a message, sending a security scare.

The lockdown was later lifted.

The American capital has been put under heightened security with the deployment of nearly 25,000 National Guards to prevent repeat of January 6 incident when thousands of supporters of outgoing US President Donald Trump stormed the Capitol Hill disrupting the constitutional process of certification of electoral college votes by a joint session of the US Congress.

Five people died in the violence that followed. Lawmakers were forced to take shelter at safe places.

In days after that an unprecedented level of security has been placed in entire Washington DC. The FBI and other intelligence agencies have received reports of armed violence in the city.

The entire city has now been converted into a garrison city with thousands of armed national guards being placed in the nook and corners of the city and eight feet high iron barricade around key places including Capitol Hill and the White House.

US Capitol Police said that the message of lockdown was due to an "external security threat located under the bridge on I-295 at First and F Streets SE." The lockdown was later lifted.

Local media reports said that there was a fire a few blocks away from the Capitol Hill resulting in the security message.

Personnel participating in rehearsal of the inauguration were evacuated as an abundance of caution. President-elect Joe Biden is slated to be sworn in as the 46th President of the United States on January 20.