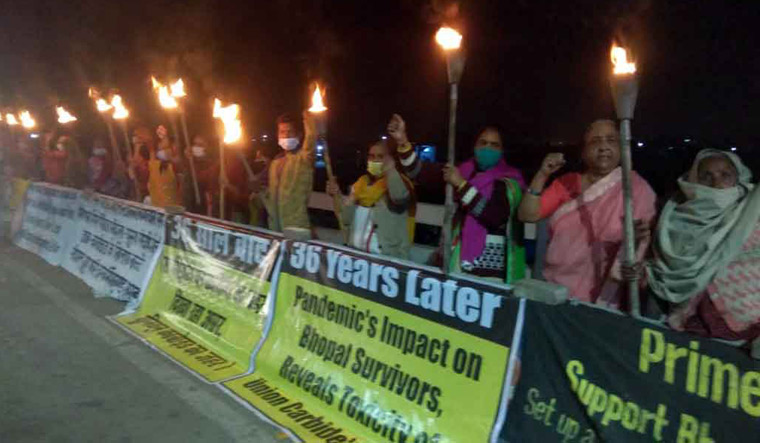 Bhopal gas tragedy survivors take out a torch rally to highlight their long pending demands, on the eve of the 36th anniversary of the tragedy on Wednesday

In a sign of international support, a motion was moved in the parliament of the United Kingdom seeking justice for the survivors of the Bhopal gas tragedy, just ahead of the 36th anniversary of the biggest industrial disaster in the world, which took place between December 2-3 in 1984.

The motion was moved by the opposition Labour Party MP from Stockport (Great Manchester), Navendu Mishra—who has Indian ancestry. It received support from 30 parliamentarians and was tabled on November 18.

The motion calls for Dow Chemical Company—the current owners of the Union Carbide Company whose pesticide plant's poisonous gas leak killed hundreds and maimed thousands—"to rectify the environmental damaged and to properly compensate the victims and their families".

Bhopal gas tragedy survivors and their next generations, apart from facing severe health problems and economic crisis, have also suffered from the impact of groundwater and soil contamination due to the poisonous waste dumped by the Union Carbide factory before its closure.

The waste disposal and environmental remediation continue to hang fire.

Mishra took to Twitter to announce that the motion was tabled. “Today is the 36th anniversary of the Bhopal gas tragedy—the worst industrial disaster in history. I've tabled a parliamentary motion calling on those responsible to be brought to justice so that the victims and their families finally receive closure,” Mishra tweeted, appending the details of the motion tabled by him.

Today is the 36th anniversary of the #Bhopal gas tragedy - the worst industrial disaster in history.

I've tabled a parliamentary motion calling on those responsible to be brought to justice so that the victims and their families finally receive closure.https://t.co/dh2BFZW26o

Of the 30 parliamentarians who signed in support of the motion, 26 are from the Labour party, while one is from the ruling Conservative Party. Of the three others, one is an independent MP while the other two are from the Democratic Unionist Party and Green Party respectively.

The text of the motion is as follows: “That this House remembers the terrible disaster that took place on 2 December 1984 in Bhopal, India, when a major poisonous gas leak from the Union Carbide pesticide plant resulted in more than 600,000 people being exposed to the highly toxic methyl isocyanate gas, thousands of people dying and many more suffering serious and life-changing injuries”.

“[The motion] notes that Amnesty International has stated that more than 100,000 people now live with contaminated water supplies and exposure to the chemicals, as well as a range of health problems and chronic illnesses caused by the disaster; further notes that current owners, Dow Chemicals, need to rectify the environmental damage and properly compensate the victims and their families,” it further states.

It goes on to commend the work of the Trades Union Congress and Unison Union in campaigning on this issue and 'calls on those responsible to be brought to justice so that the victims who have been waiting 36 years for justice finally receive closure'.

Organisations working for and supporting the cause of the gas tragedy survivors have expressed gratitude to the British parliamentarians for their support.

Rachna Dhingra of Bhopal Group for Information and Action (BGIA) has tweeted to thank Navendu Mishra for tabling the motion “Hopefully our prime minister will do the same. In the last 36 years, it is the interest of the corporations that have taken priority. Maybe this year our elected representatives will listen to the long-standing demands of the Bhopal survivors,” she said.

Speaking to THE WEEK, Dhingra said that apart from being a supportive gesture, such a stand by the British parliamentarians is very important as they can always make a move to block investments by the Dow Chemical Company in their respective areas, thus putting pressure on them.

The Friends of India Society International, UK, also tweeted thanking Navendu Mishra for tabling the motion “asking for long-awaited justice to the (Bhopal gas tragedy) victims, including proper compensation and rectification of the environmental damage.”