Authorities must work to release hundreds of detainees to ease overcrowding 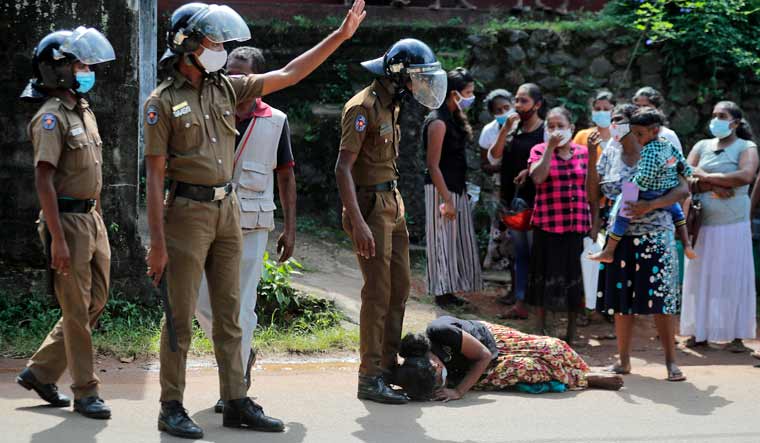 A family member of an inmate pleads lying at the feet of a policeman as she seeks information on the condition of her relative outside the Mahara prison complex following an overnight unrest in Mahara, outskirts of Colombo, Sri Lanka | AP

Amnesty International has called for a thorough and impartial investigation into the deaths of at least 11 inmates in a prison riot in Sri Lanka and asked the authorities to implement their commitments to release hundreds of detainees to ease overcrowding and improve conditions in the country's jails.

The riot broke out over rising coronavirus infections on Sunday in the Mahara prison on the outskirts of Sri Lanka's capital Colombo when some inmates tried to force open a door and escape, prompting the authorities to use force.

The incident happened as pandemic-related unrest has been growing in Sri Lanka's overcrowded prisons. Inmates have staged protests in recent weeks in several prisons as the number of confirmed COVID-19 positive cases spiked in the country's overcrowded jails.

In the immediate term, there must be a thorough and impartial investigation into this incident and the use of lethal force  including firing live ammunition  by prison authorities, David Griffiths, Director of the Office of the Secretary General at Amnesty International said in a statement.

The investigation must also address the underlying causes. The incident reflects the anxiety among prisoners about the threat of COVID-19 within severely overcrowded prisons and the inadequate measures in place to protect them. There is already a swelling number of inmates across the country who have tested positive for COVID-19.

The Sri Lankan authorities must implement their commitments to release hundreds of detainees to ease overcrowding and improve prison conditions. A failure to do so could see more infections, more prisoner unrest, and a greater likelihood of further violence, Griffiths said.

The organisation said that the incident at Mahara Prison Complex was the third time this year that lethal force has been used against prison inmates in Sri Lanka since the outbreak of COVID-19 in the country.

In March, two prisoners were killed and several others injured in Anuradhapura prison in North Central Province, following a protest related to COVID-19.

On November 18, a prisoner was shot dead while trying to escape from Bogambara Prison in Central Province, where more than 100 inmates had tested positive for COVID-19.

Commenting on the incident, top prison official Chandana Ekanayake said that about 1,600 prisoners from a total number of 2,759 inmates at Mahara had rioted.

They gathered at the main door of the prison having broken out through the doors where they had been held, the official said.Ekanayake said the rioting inmates demanded that PCR tests be conducted for all prisoners.

Their motive was to stage a jail break  most of them were drug suspects, he said.

The government said there are four separate probes going on in the incident and details would be revealed in parliament as soon as it was possible.