Sparking fears of violence, Trump supporters rally across US amid 'disputed' election claims 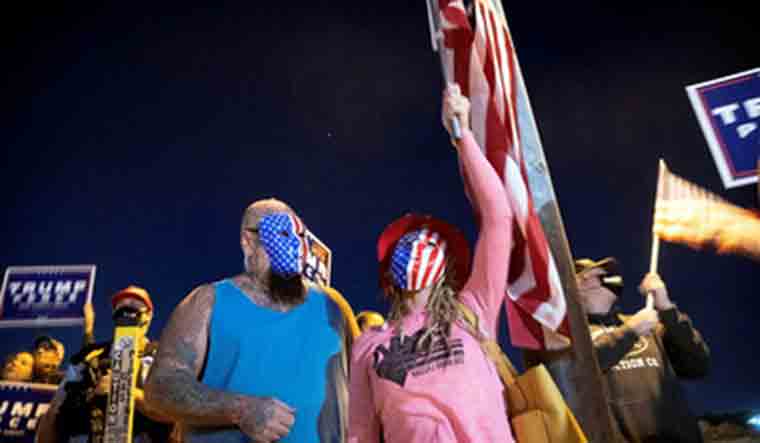 Mike and Wetonia Houlihan join other supporters of U.S. President Donald Trump during a "Stop the Steal" protest at the Clark County Election Center in North Las Vegas, Nevada, US | Reuters

Supporters of US President Donald Trump converged in Washington on Saturday behind his claim of a stolen election and swarmed his motorcade when he detoured for a drive-by on his way out of town. A week after the presidential race was called for Democrat Joe Biden, hundreds of Trump loyalists converged on the nation's capital to protest the election results and assert the vote was stolen.

Trump had met supporters with a slow motorcade drive-by through downtown Washington on the way to his Virginia golf club. Trump had claimed election fraud and refused to concede in the presidential polls that was recently called for Joe Biden. AP reported that the crowd cheered as Trump's limousine neared and people lined both sides of the street. Some stood just a few feet away from Trump's vehicle; others showed their enthusiasm by running along with the caravan.

A week after Democrat Joe Biden was declared the winner of the election, demonstrations in support of Trump took place in other cities. Fury at the prospect of a transfer of executive power showed no signs of abating, taking a cue the president's unrelenting assertion of victory in a race he actually lost.

In Delray Beach, Florida, several hundred people marched, some carrying signs reading 'Count every vote' and 'We cannot live under a Marxist government'. In Lansing, Michigan, protesters gathered at the Capitol to hear speakers cast doubt on results that showed Biden winning the state by more than 1,40,000 votes. Phoenix police estimated 1,500 people gathered outside the Arizona Capitol to protest Biden's narrow victory in the state. The crowd in Washington was beginning to gather Saturday morning when cheers rang out as Trump's limousine neared Freedom Plaza.

People lined both sides of the street, some standing just a few feet away from Trump's vehicle. Others showed their enthusiasm by running along with the caravan.

Among the speakers was a Georgia Republican newly elected to the US House. Marjorie Taylor Greene, who has expressed support for QAnon conspiracy theories, urged people to march peacefully toward the Supreme Court. The marchers included members of the Proud Boys, a "neo-fascist group", reported AP.

By the late afternoon, a few hundred anti-Trump demonstrators engaged in shouting matches with scattered groups of Trump supporters. One group of Trump supporters were hit with eggs and one person lost his red MAGA hat, which was set on fire to cheers. Multiple police lines blocked Trump supporters from entering the Black Lives Matter Plaza area as night fell. Those who managed to get inside the area were doused with water and saw their MAGA hats and pro-Trump flags snatched.

The Million MAGA March was heavily promoted on social media, raising concerns that it could spark conflict with anti-Trump demonstrators, who have gathered near the White House in Black Lives Matter Plaza for weeks.