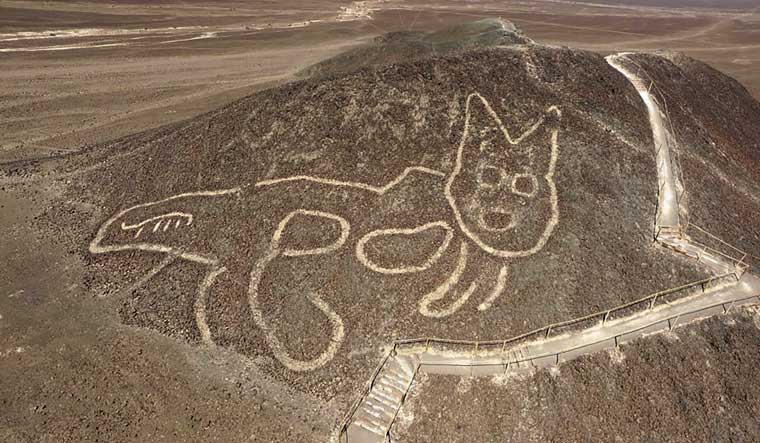 Handout picture released by the Peruvian Ministry of Culture, showing a giant cat figure etched into a slope at the UNESCO world heritage site in the desert near the town of Nazca in southern Peru | AFP

A 2000-year-old cat geoglyph was found etched in a Peru desert. The huge feline figure is possibly the world's oldest geoglyph. The figure discovered in southern Peru measures 37 metres across and forms part of the Nazca Lines, a collection of hundreds of mysterious artworks etched onto a plateau 250 miles south of Lima.

Other depictions include that of a hummingbird, pelican and a monkey. The geoglyph was discovered by a maintenance worker, who was at a visitor vantage point-- it was already a popular tourist destination. The geoglyph, which had started to fade has been restored since its discovery about a week ago.

“Representations of this type of feline are frequently found in the iconography of ceramics and textiles in the Paracas society,” Ministry of Culture's press release explained.

The Nazca Lines were created by removing top layers of rock and gravel to reveal lighter-coloured bedrock beneath by people from pre-Hispanic societies. Very few human-like figures have been found in the region-- the depictions have been more of animals, birds, plants and everyday objects.

The geoglyphs, which were created between 500 BC and 500 AD, cover an area of around 450 square kilometres and was added to UNESCO's World Heritage List in 1994.
“They are the most outstanding group of geoglyphs anywhere in the world and are unmatched in its extent, magnitude, quantity, size, diversity and ancient tradition to any similar work in the world,” reads a listing on UNESCO's website.