Cambodia breaks up anti-China protests against alleged military base

After brief scuffles, three protesters were taken to a nearby police pickup truck 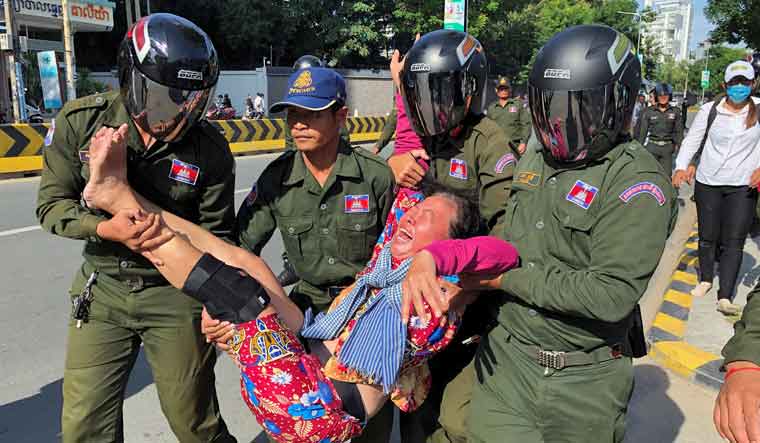 A small protest near the Chinese embassy in Cambodia was broken up by security guards on Friday. The protest was opposing Beijing's alleged plans to boost military presence in the country. Some demonstrators have been detained by the police for questioning.

Cambodia, an important ally of China has been in recent years accused of giving Beijing influence in return for economic support.
After brief scuffles, three protesters were taken to a nearby police pickup truck by city security guards.
“We reject the Chinese military presence in Cambodia,” shouted one protester, waving a Cambodian flag, as a police officer with a loud hailer gave the group five minutes to disperse.

Prime Minister Hun Sen had earlier warned supporters of the banned Cambodian National Rescue Party (CNRP) not to stage protests outside the Chinese embassy.
“I will not tolerate any group that plans to protest on 23 October 2020 in front of the Chinese Embassy in Phnom Penh,” Sen said.

The Cambodian government led by Hun Sen's Cambodian People’s Party (CPP) has repeatedly denied reports that China had reached a secret deal to let it place forces at the Ream Naval Base, and maintained that hosting foreign forces would be against Cambodia’s constitution.
Phnom Penh police spokesman San Sok Seyha said those detained had been taken in for questioning since they did not have permission to gather for a rally. October 23 is the 29th anniversary of the Paris Peace Accords.


The accords brought together warring factions in Cambodia into an agreement that guaranteed democracy and paved the way for UN-backed elections in 1993.
The CNRP alleges that Hun Sen has breached that agreement, eschewed Western democratic principles, and aligned the CPP with China.


Ahead of the 2018 elections, the government launched a crackdown, wherein the CNRP was dissolved by the courts and its members jailed or fled overseas and independent media closed or was sold to government-friendly interests. The CPP won every seat contested at the poll. PM Hun Sen's party had then accused the CNRP of plotting to take power with the help of Washington, an allegation denied by the CNRP.