Nine dead, as many missing as floods ravage parts of France, Italy 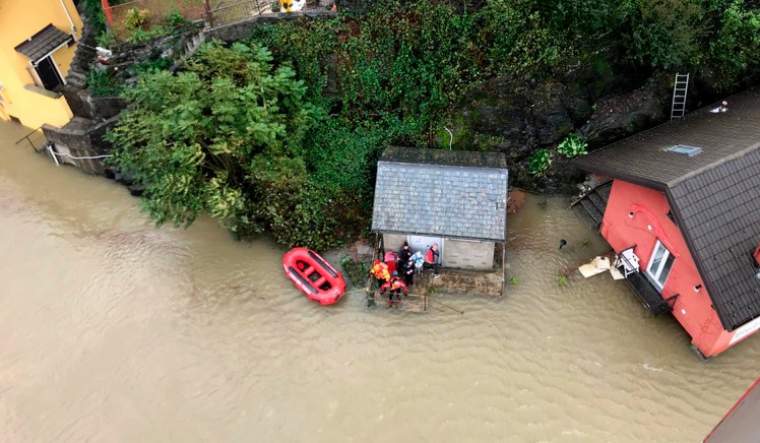 Nine people have died and as many are missing after devastating floods hit parts of France and Italy over the weekend following record rains. Seven bodies were found in the region straddling the French-Italian border near Nice, after the area received 500mm rain in 10 hours.

Roads and homes have been damaged by the storm dubbed as Alex. The storm moved across southeast France and then hit northern Italy, causing major flooding on both sides of the border.

Several villages around the city of Nice on the French Riviera have been ravaged by the rains. Nice Mayor Christian Estrosi called it the worst flooding disaster in the area for more than a century.

Sambughetto, near Switzerland, recorded 630 mm of rain in 24 hours, more than half its annual average rainfall. Cars have been left overturned, and streets littered with debris. The water level in the River Po in Italy increased by 3 metres (9.84 feet) in just 24 hours.

Rescue operations are on at the France-Italian border, with firefighters searching for survivors both on the Italian as well as the French side. Rescue workers are also providing villages on both sides with fresh food and water.

“What we are going through is extraordinary,” Bernard Gonzalez, the prefect of the Alpes-Maritimes region in France, was quoted as saying by AFP.

Rescue workers backed by army helicopters are also on the lookout for people who might be trapped at their homes in the Roya Valley in France. In France, almost 1,000 firefighters were drafted into the Alpes-Maritimes region to look for the missing.

In Venice, the Mose flood barrier survived its first real test and managed to keep St Mark’s Square dry despite high water levels. In November 2019, Venice faced a flood 1.87 metres high—the highest in more than 50 years, with at least 85 per cent of the city underwater.