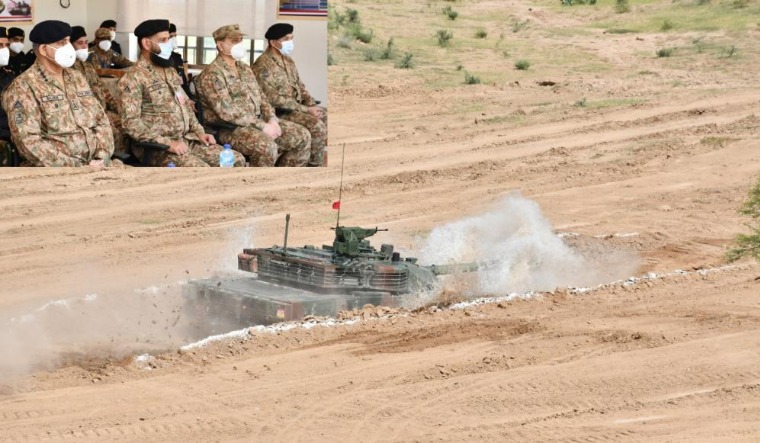 The VT-4 tank on exercise | ISPR

This news triggered speculation among defence observers that the buyer was Pakistan. Quwa, a Pakistani defence analysis website, reported that the Pakistan Army had ordered at least 176 VT-4 tanks at a cost of $859 million. The VT-4 is also known as MBT-3000.

The VT-4 has already been sold to Thailand and Nigeria. In April, Global Times reported the two customised tanks sold to the undisclosed customer had a "different turret boost design".

"The front design features a new explosive reactive armour," the Global Times reported. Explosive reactive armour is 'add-on' armour mounted on a tank to protect against enemy rounds by exploding outward. The VT-4’s dimensions are comparable to the Indian Army’s Russian-origin T-90 tanks. Like the Indian Army's T-90 tanks, the VT-4 has a 125mm gun that can fire both conventional tank rounds and also missiles. Images of the VT-4 tank from Tuesday's exercise show it is equipped with a remote weapon system atop the turret. A remote weapon system on a tank typically is a small gun that is controlled remotely and is useful against infantry and other light targets.

A report of the US Congressional Research Service in January 2017 noted "The MBT-3000 was developed specifically for export and China claims it is fully, digitised, fitted with an air conditioning and NBC protective system and features an inertial navigation/global positioning system".

The Inter-Services Public Relations department of the Pakistan Army noted the VT-4 is "compatible with any modern tank in the world, integrating advanced armour protection, manoeuvrability, firepower capabilities and state-of-the-art technology".

The ISPR described the VT-4 as another addition to Pakistan's Armoured Corps after the induction of the indigenously built Al-Khalid-1 Tank. The Al-Khalid-1 was developed with cooperation from China and Ukraine. The ISPR claimed "This potent war fighting machine will be employed in offensive role by strike formations after induction".

Speaking at the event, Bajwa said, “The Pakistan Army is alive to emerging challenges and regional threats. We are completely focused towards internal and external challenges to defence of country and prepared with matching response against all threats to sovereignty, security and .territorial integrity of Pakistan."