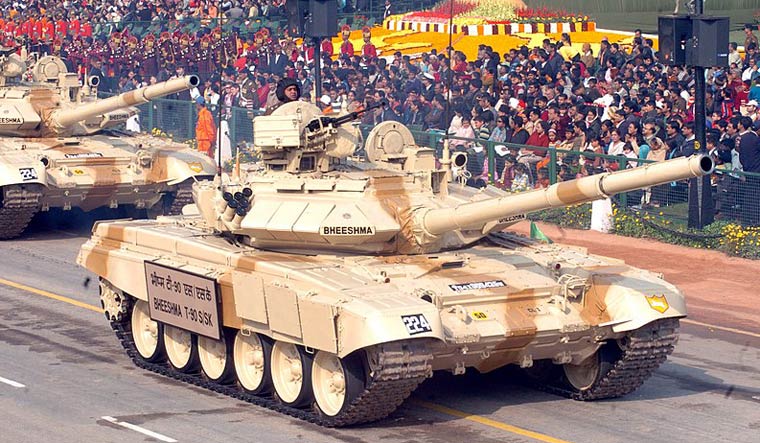 At a time when the modernisation of the Indian Army's armoured corps is moving at a "snail's pace", Pakistan has drawn up a mega plan to procure nearly 600 modern main battle tanks, including the T-90 from Russia, primarily to bolster its combat prowess along the Line of Actual Control in Jammu and Kashmir, military and intelligence sources said on Sunday. The T-90 is also operated by the Indian Army.

Most of the tanks Pakistan was planning to procure were likely to have features like state-of-the-art computerised fire control system for increased accuracy, and they would be able to hit targets within a range of 3 to 4km, sources told PTI.

Some of the tanks are set to be deployed along the Line of Control and they will have wider features for battlefield effectiveness, they added.

Apart from the battle tanks, the Pakistan Army is also procuring 245 150mm SP Mike-10 guns from Italy. It has already received 120 such guns.

The intelligence sources said Pakistan was eyeing a batch of Russian T-90 battle tanks—the mainstay of the armoured regiments of the Indian Army—and that the move reflects Islamabad's intent to forge a deeper defence engagement with Moscow, which has been India's largest defence supplier for decades.

Pakistan has been holding joint military drills with Russia in the last couple of years besides eyeing to purchase Russian platforms, triggering some concern in New Delhi.

The sources said as part of the ambitious plan to significantly revamp its armoured fleet by 2025, Pakistan has decided to procure at least 360 main battle tanks from leading global manufacturers and produce 220 tanks indigenously with help from China.

The Pakistan Army's move to enhance its armoured corps comes at a time the Line of Actual Control in Jammu and Kashmir has witnessed growing hostilities, especially over the last one year. The Indian Army has been strongly retaliating to every unprovoked firing by the Pakistani side.

But, when the Indian Army is focused on counter-terror operations, the Pakistan Army was fast reducing its gap with Indian forces in fighting a conventional war, the intelligence sources said, adding Islamabad was also gradually increasing its missile regiments.

Military sources said modernisation of the Indian Army's armoured regiments was moving at a "snail's pace" due to procedural delays and the issue was being examined at a very high level of the government.

The Indian Army had drawn up a mega plan to modernise its infantry and armoured corps. However, almost all the procurement projects, including the Rs 60,000-crore Futuristic Infantry Combat Vehicle (FICV) programme, are stuck due to a variety of reasons.

At present, India's armoured regiments, comprising mainly the T-90, the T-72 and the Arjun tanks, have superiority over Pakistan, but sources said Islamabad was seriously planning to bridge the gap at the earliest.

As against around 67 armoured regiments of the Indian Army, the number of similar regiments in the Pakistan Army is around 51, the sources said.

At present, over 70 per cent of the tanks in Pakistan's armoury have the capability to operate at night, which, the intelligence sources said, was a matter of concern.

Besides eyeing the T-90 tanks, the Pakistan Army is also in the process of inducting the Chinese VT-4 tanks as well as the Oplod-P tanks from Ukraine, the sources said. Trials for both Oplod and VT-4 tanks have already been conducted by the Pakistan Army.

At present, Pakistan is learnt to have around 17 units of the Chinese-origin T-59 and T69 tanks, which comprise 30 per cent of its total tank strength, the sources said. The Pakistan Army also has 12 regiments of Al-Zarar tanks, which makes up 20 per cent of the tank fleet while the Ukrainian-origin T-80-UD and T-85-UD as well as upgraded version of the T-59 tanks comprise the remaining 50 per cent, they said.

"The Pakistan Army is carrying out modernisation of its armoured regiments in a calibrated and time-bound manner, which is not the case in India," said an expert, who wished not to be named. He said it was a matter of concern the way Pakistan was modernising its tank fleet.

The Indian Army has also raised an independent tank brigade, which is stationed in Ladakh but it is not enough, the expert said.