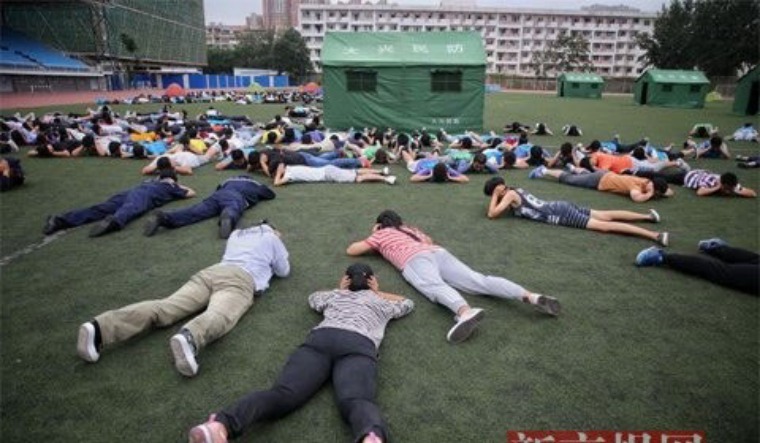 Indian and Chinese troops remain deployed along the Line of Actual Control. Even as both sides have announced plans to continue talks between military officers to end the ongoing standoff in Ladakh, China's state-run media is continuing to publicise ongoing military exercises in the region.

China's state-run Global Times on Wednesday tweeted video footage of anti-aircraft exercises of the "Tibet Military Command". The Global Times tweeted the live-fire drill was held in the "4,500-meter high Tanggula Mountains". The video showed air defence radars, anti-aircraft guns and surface-to-air missiles in operation. Chinese state media has regularly been publicising military exercises and deployments in the region since May, when the standoff in Ladakh started.

Now, a Chinese state-run outlet has reported that the government of Lhasa city, the administrative capital of the Tibetan Autonomous Region, will hold an air raid drill in the city on September 19. People's Daily reported on Tuesday the air raid drill was being held “in order to improve the general public's national defence concept and civil air defence awareness..."

The exercise will be held from 12pm to 12.15pm (local time) on September 19. People's Daily called on "all citizens, government agencies, enterprises, institutions and social organisation personnel" to pay attention to the alarms. It added the drill would not interrupt normal life and activities.

China has been holding air raid drills in major cities, including Beijing and Shanghai, in September to mark the annual National Defence Education Day. Shanghai Daily reported last week that the air raid drill this year will be organised in most areas of the city from 11.35am to 11.58am on September 19. The publication added the drills have been conducted in Shanghai for 12 straight years. "Drills including evacuations of high-rise buildings and crowded public places will be conducted mostly in residential area," Shanghai Daily reported.

The International Campaign for Tibet, a US-based organisation working for democracy in Tibet, reported the "The only other time in the recent past when such an alarm test was conducted in Lhasa was in 2009."

The International Campaign for Tibet questioned whether the timing of the air raid drill was a message to India amid the standoff in Ladakh.

"...in the current period of ongoing tension between China and India along the Tibetan border, there is certainly cause to question the need for such a test in Lhasa, unless the point is to send a message to India," the International Campaign for Tibet noted.

China has two airbases in Lhasa. In 2018, the Hindustan Times reported that China was building blast-proof bunkers at the Gonggar airport in Lhasa. Officials claim the bunkers could house up to 36 fighter aircraft.

However, the utility of Lhasa for possible military operations in Ladakh remains limited given the distance of over 1,000km.