How the Mekong countries contained COVID-19 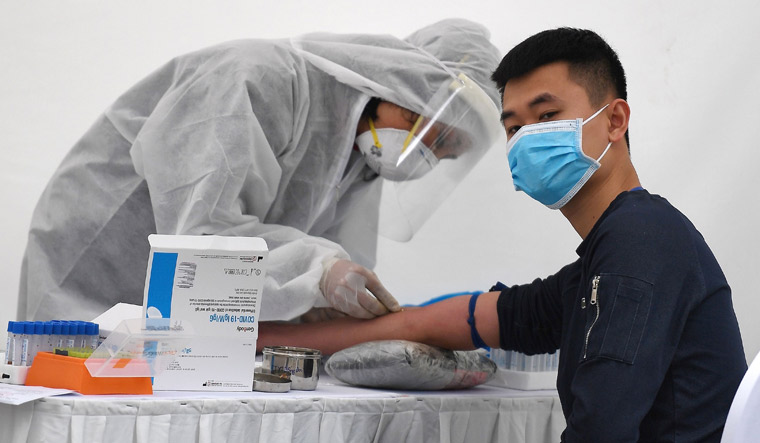 A strong and stable response to the COVID-19 pandemic by countries in southeast Asia’s Mekong basin provides a remarkable contrast to the catastrophe unfolding in many parts of the world like the United States, where the uncoordinated response has prevented a national strategy, causing deaths to mount by the day.

The US, which once dominated the airspace over savage fighting on the ground in the Mekong basin, can now look up to the region as a source of significant lessons in stopping and neutralising the threat of the pandemic.

A memory of earlier viral outbreaks such as SARS (Severe Acute Respiratory Syndrome) and MERS (Middle East Respiratory Syndrome), a population with a history of compliance with government orders, immediate and drastic reactions by governments and a much younger population have helped the region in containing the pandemic despite its proximity to Wuhan, the pandemic’s ground zero.

The five countries of the basin together have identified less than 5,000 cases and 88 deaths—six in Myanmar, 24 in Vietnam and 58 in Thailand, which was the first country after China to report Covid-19. Laos and Cambodia are yet to report any deaths.

These five countries monitored the outbreak well from the start or caught up rapidly after an initial outbreak, forcefully stalling its advance, controlling the number of confirmed cases and increasing the ratio of tests to confirmed cases. As a result, in an area that seemed ripe to be overrun by the pandemic, there are no overwhelmed hospitals, no pictures of the dead or no tragic stories of powerlessness before the virus.

The Mekong basin ends in the Mekong delta, a multi-channel estuary that begins in Cambodia’s capital Phnom Penh and flows south mostly within Vietnam, where it meets the South China Sea.

The river defines the region into a common economy. Through 11,000km of canals and 20,000km of flood-dykes, people and resources flow easily between the countries.

The area’s mostly Buddhist population share social, cultural, economic and even food habits. These similarities extend to a healthy respect for government, a whole-of-society war footing, a common experience with past epidemics and government structures down to the village level.

“It has to do with the culture,” said Dr Taweesilp Visanuyothin of Thailand’s Centre for COVID-19 Situation Administration. “Thai people do not have body contact when we greet each other. This is how people in the Mekong region greet each other as well.” The Thai wai gesture of bringing palms together in front of the face or chest is much like the Indian namaste.

Vietnam took a multidisciplinary and integrated approach early on and created a National Steering Committee (NSC). The prime minister himself carefully addressed issues and problems daily on television news, boosting the credibility of NSC recommendations.

Transparency of communications was crucial to getting a public buy-in. “From an early stage, communications about the virus and the strategy were transparent. Details on symptoms, protective measures and testing sites were communicated through mass media, a government website, public grassroots organisations, posters at hospitals, offices, residential buildings and markets, and via text messages and voice messages before phone calls,” said Le Vu Anh, president of the Vietnam Association of Public Health. The government also launched a contact tracing app in big cities.

The Vietnamese government was clear about the threat of infection even before the first case was reported. “The lesson learned was that panic and fake news would bring about unexpected consequences which are very difficult to control not only during that time, but for a long time. Transparent reporting and updating real information would be the best way of dealing with the outbreak in terms of communication,” said Anh.

In April, the country issued a decree imposing fines for those who “share false, untruthful, distorted, or slanderous information” on social media. “Quarantine, testing and availability of free services are crucial in containing the pandemic in developing countries,” said Anh.

Like the successful containment effort in Guayaquil, the Ecuadorian city which was once hit hard by the pandemic, ensuring that people were fed and informed through neighbourhood visiting brigades formed an integral part of the success of the strategy.  The country even stopped rice exports to ensure food security. "Vietnam mobilised neighbourhood self-defence militias and neighbourhood organisations to help spread the information and keep people posted,” said New York activist Cathy Dang-Santa Anna while interacting with researchers from the International Monetary Fund.

“The government strictly controlled the situation,” said Tam Huu, owner of Guitar Hawaii, a bar for foreigners in the ancient tourist city of Hoi An, which has been closed because of the pandemic.

“People are wearing masks, washing hands and using disinfectants. I want to visit my wife and children in Da Nang, but they still will not let me pass. The roads are blocked for the safety of the community.”

Considering that most of these measures were implemented despite having only a handful of confirmed cases, the success seems to rest on overreacting and doing it early. In late February, while President Donald Trump was boasting, “You have 15 people, and the 15 within a couple of days is going to be down to close to zero,” Vietnam’s aggressive preventative action contained the virus.

The country, as on August 16, has 964 cases and 24 deaths. On July 24, Vietnam reported its first domestically transmitted case in 100 days and moved quickly to put down an outbreak that infected more than 500 people. When the July outbreak was identified, Vietnam took “unprecedented measures” to stop the spread, according to Dang Duc Anh, director of Vietnam’s National Institute of Hygiene and Epidemiology. The country went on high alert. Entertainment venues were immediately closed and gatherings restricted. In Da Nang, the epicentre of the outbreak, movement in and out of the city were banned and the government said it would test the city’s entire 1.1 million population.

Like Vietnam, neighbouring Thailand, too, set up an early and vigorous protocol, adopting the use of facemasks, closing schools, and enforcing social distancing. Today, 95 per cent of Thais and 94 per cent of Vietnamese are likely to wear a mask, compared with 44 per cent Americans. The Thai government has made sure that people know its policies have been guided by scientific and technical committees. Local doctors, hospitals, and health officials have been working in tandem with the National Institute of Health of Thailand.

The Thai cases can be traced to a wave of infections from a boxing match on March 6 that became one of the world’s first Covid-19 superspreader events and to people arriving from Japan, Europe and the US, according to the Thai NIH.  The country declared a national state of emergency and curfew, sealing its borders and forbidding interprovincial travel.

Lockdown was thorough and it brought down transmissions. The tourist island of Phuket closed down to sub-district level. People could not leave a sub-district except for emergencies, and movement within the sub-district’s villages was severely limited. It worked. Thailand remains at 3,378 cases and 58 deaths. 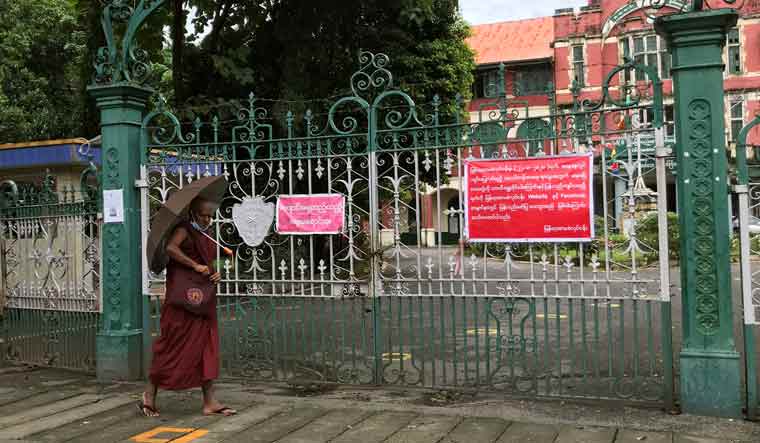 A Buddhist monk walks past a closed school amid the COVID-19 outbreak in Yangon August 27, 2020 | REUTERS/Zaw Naing

Taken alone, the total of six deaths reported by  Myanmar and zero by Laos and Cambodia seems statistically implausible. It is tempting to explain it as underreporting or perhaps false government figures while the virus thrives undetected. Yet,  Medical Action Myanmar, a medical aid organisation focusing on the area’s poorest people, has been able to keep open its HIV clinics and said none of its patients went without treatment, implying that there simply is no large-scale transmission in the area. MAM director Dr

Frank Smithuis said it was impossible to hide a Covid-19 outbreak.  Experts in Cambodia, Thailand and Vietnam have not reported any evidence of widespread infections, which is corroborated by satellite imagery. To be sure, common practices have spread through the countries of the basin and some of them deserve mention. These include emergency operation centres and surveillance systems, early and large reaction, efficient contact-tracing systems, quarantines based on likely exposure, a narrative-based communication across multiple channels and an unambiguous message and cohesive participation in decision-making and implementation.

“Infections and deaths are low almost entirely thanks to a moderate, reasonable, responsible and considerate population. Wearing masks, no hugs, no handshakes and no kisses helped immensely,” said Milos Zorica, a Croatian expat in Thailand, discussing the cultural differences that could account for the low transmission rate.  “The government did not compromise. Scientists and medical professionals had a say in the response and are well regarded by everyone.” World Health Organisation director-general Tedros Adhanom Ghebreyesus said new cases went down in countries where the public followed preventive measures.  “Informing, engaging and listening are key pillars that will help us get through this worldwide crisis together.”

According to WHO, Thailand is a model for having carefully and consistently followed the organisation’s guidelines and arresting the spread of the virus. Bloomberg ranks the country fourth in the world in dealing with the pandemic, while the Global Covid-19 Recovery Index ranks it first. Thailand has developed a vaccine which starts human trials in October, an effort spearheaded by the

Chulalongkorn University, with support from the biotech company BioNet-Asia.

In the United States, however, there is no national strategy. There is a White House-driven push to reopen as soon as possible in order to revive the economy. There are 50 different strategies across the 50 states and competing strategies at municipal levels. Recommendations by the Centers for Disease Control and  Prevention have been repeatedly undermined by the White House. Governors and mayors choose at will whether to follow those recommendations. There simply is no unified leadership or communication strategy.

“The US will keep smouldering if there is no unified response,” said Dr Anthony Fauci, the country's top epidemiologist and the director of the National Institute of Allergy and Infectious Diseases. “So as long as you have any member of society, any demographic group who is not seriously trying to get to the end game of suppressing this, it will continue to smoulder and smoulder and smoulder, and that will be the reason why in a non-unified way we have plateaued at an unacceptable level."

On August 14, the United States reported 60,600 new cases and 1,120 new deaths, while Vietnam reported 119 new cases and one new death. Thailand reported just seven new cases. People in Vietnam and Thailand are moving on and returning to a careful routine with masks. What happens in these countries is likely to spread to Cambodia, Laos, and Myanmar.

“Bangkok is moving forward cautiously,” said Zorica. “I am grateful for riding the storm out here. My life, despite multiple ailments, is largely unaffected. The government, scientists, and medical professionals work together and there is a credible, clear message.”