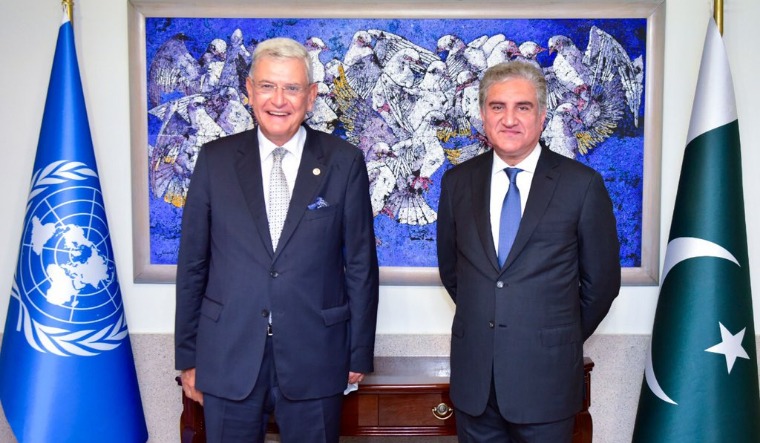 A Turkish diplomat who will assume the office of president of the UN General Assembly when it meets in September has praised Pakistan's fight against the novel coronavirus outbreak.

“Pakistan has been a good example to the world with its policies related to the global pandemic. It has performed better than any other country in dealing with the global pandemic and I am happy to observe it also with my own eyes," Bozkir was quoted as saying by Geo News after a press conference with Qureshi. As of Monday, Pakistan has reported 2,85,016 COVID-19 cases and 6,107 deaths from the pandemic. The Imran Khan government has claimed that it has slowed down the spread of the pandemic and has begun reopening economic and travel activities in the country.

During his meeting with Bozkir, Qureshi declared Pakistan "expects" the UN General Assembly to play an effective role in resolving the Kashmir dispute with India. According to Geo News, Qureshi spoke to Bozkir about human rights violations in Kashmir and "extrajudicial killings" there. Qureshi declared it was his desire to have a debate in the UN General Assembly on the Kashmir issue as the body represented the “pulse of the world and view of the comity of the nations".

"The prime minister highlighted the dire rights and humanitarian situation in occupied Kashmir since August 5, 2019, as well as the ongoing gross and systematic violations of human rights and attempts to change the demographic structure of the occupied territory," Dawn reported.

Despite the prodding from Qureshi and Imran, Bozkir shied away from offering to mediate without a nod from India.

In his news conference along with Pakistan Foreign Minister Shah Mahmood Qureshi, Bozkir said that the resolution of the Kashmir issue was vital for sustainable peace in South Asia, and offered that he can help as per his mandate. "If my assistance is requested by the parties, I will be ready to provide contributions within my mandate,” he said.

Bozkir also emphasised the Simla Agreement of 1972 provided for bilateral talks. "There is also the 1972 Simla agreement between India and Pakistan, which states that final status of Jammu and Kashmir should be settled by peaceful means under UN charter,” Bozkir said.