Will Trump blindside Modi by bringing up Kashmir?

Since last year, Trump has repeatedly offered to mediate between India, Pakistan 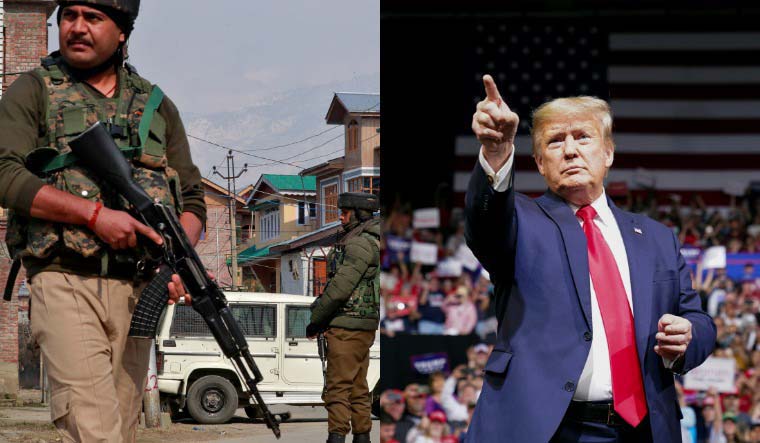 Trade, defence deals, the Indo-Pacific: There's a lot likely to be on the Modi-Trump table when the US president visits India. One likely dish, however, will be particularly unsavoury for India. Will Donald Trump still insist on this taste spoiler—the K-word?

Kashmir is a subject that Trump has been rather keen on, and over the last year, he has made various offers to act as a mediator between India and Pakistan in resolving the “Kashmir issue”. This despite India repeatedly emphasising that its stated policy is Kashmir was a bilateral issue on which no third party is welcome. So much so that when Trump offered himself as a mediator once again this January, in Davos, India didn't even respond, apart from saying its position hadn't changed.

It was on July 22, 2019, that Trump first announced the offer of mediation, adding that Narendra Modi had asked him to mediate on the Kashmir issue. India went blue in the face, denying any such appeal.

Yet, a day after the rockstar 'Howdy, Modi' show in Houston last September, Trump again said he was keen to mediate between the two nations on Kashmir, this time adding the offer was if the two parties were open to the idea. He was with Pakistani Prime Minister Imran Khan then, just before the United Nations General Assembly meet. In Davos, too, Trump made the offer in the presence of Imran Khan.

“Trump fancies himself as a great unifying force in the world. This being an election year, if he is seen to have taken any definitive steps towards peace and harmony or a more secure US, it will play to his advantage,'' notes Preity Upala, US-based geopolitical analyst.

In fact, a report by the Congressional Research Service, a think tank that provides policy analyses to the US Congress and Senate, notes that one reason for India to abrogate Article 370 could well have been Trump's perceived warm relationship with Imran Khan last July and his offer to mediate on the Kashmir issue.

Trump's repeated offers for his mediation services may be easy for India to sidestep. However, with the international focus firmly on the “situation in Kashmir” since last August, India will not find it that easy to evade the 'K-queries' by hiding behind the veil of its stated policy. Only recently, United Nations Secretary General Antonio Gueterres, on a visit to Islamabad, made an offer similar to Trump's.

In the US, as well as in the European Union and other countries, lawmakers aren't willing to quieten down because this is “an internal matter” for India. The prolonged clampdown in the region—with 2G internet services only recently being made available and with a host of leaders across the political swathe still kept under house arrest—has raised concerns about human rights violation by the Indian government.

Clearly, India hasn't done enough to assuage the world about its intent. A recent exercise to take envoys on a visit to Kashmir (there have been two such excursions so far) has had limited impact. The US ambassador was a member of the first group to be taken to Kashmir in January. He himself hasn't commented on the tour, but the US State Department said while the visit was a welcome step, there was still concern over the detention of political leaders and restoration of internet services.

The US has had two Congressional hearings on Kashmir, and Eliot Engel, US House Foreign Affairs Committee chairperson, said that a draft resolution on the ongoing situation in Kashmir could be out in the coming months. A bipartisan group of senators have written to Secretary of State Mike Pompeo about their concerns regarding the Kashmir situation as well as the recently promulgated Citizenship (Amendment) Act.

India's belligerent stance with critics doesn't make for smooth diplomacy either. External Affairs Minister S. Jaishankar famously refused to meet a Congressional delegation on a recent visit to the US, as one member, Indian-origin Pramila Jaypal, was openly critical of India's Kashmir clampdown.

The refusal of Finance Minister Piyush Goyal to meet Jeff Bezos, Amazon founder and owner of The Washington Post, during a visit to India, is also said to be because of the newspaper's critical stance on India's actions in Kashmir.

Jaishankar is learning to soften his snubs with humour. When Senator Lindsey Graham, a confidant of Trump, said at the Munich Conference that the best way to sell democracy would be to settle the Kashmir issue democratically, the minister, taking a leaf out of the book of his predecessor, Sushma Swaraj, tweeted, “Do not worry Senator. One democracy will settle it and you know which one."

India has been managing the negative opinion on its decisions with Modi's brand of political muscle. However, observers feel that India could create better optics for itself. Former diplomat and author G. Parthasarathy noted that it was time India distinguished between “Pakistan-backed separatists and political leaders who have sworn allegiance to the Indian Constitution and never advocated violence.” He added that easing internet restrictions was also important.

Managing Kashmir during bilateral talks may not be too difficult for India's seasoned diplomats to handle. Managing the perception on the global stage, however, will require a little relaxing of that muscle.