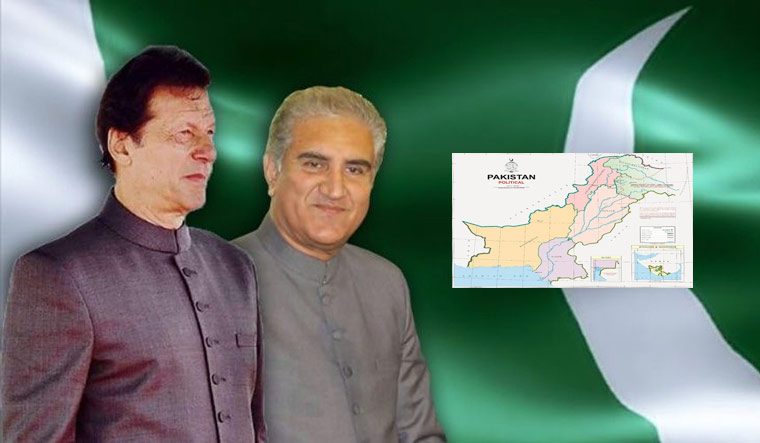 India on Tuesday responded strongly to Pakistan’s release of a new political map that incorporated Pakistan-occupied-Kashmir as well as parts of Jammu and Kashmir and Gujarat into Pakistani territory, calling the release “exercise in political absurdity ”that had neither legal validity nor international credibility”.

In a move designed to needle India on the eve of the 365-day anniversary of the August 5 abrogation of Article 370 and the bifurcation of Jammu and Kashmir, Pakistan had on Tuesday released a new political map which depicts all of Kashmir as being part of its territory, as well as the regions of Sir Creek and Junagadh.

The map was unveiled by Pakistan Prime Minister Imran Khan, who said the new map negates India’s “occupational illegal action” of August 5, and that it had been endorsed by the federal cabinet.

This map will be officially used in Pakistan's curriculum henceforth, Khan added.

The new map showed the Pakistan frontier clearly marked with India with the entirety of Kashmir as its territory. However, the part of the Kashmir and Ladakh border with China was not marked and was described as “Frontier Undecided”.

Similarly, the Line of Control had been extended to the Karakoram Pass, clearing showing Siachen as part of Pakistan. The LoC had been marked by a red dotted line.

J&K was described as a "Disputed Territory" whose final status is to be decided "in line with relevant UNSC resolutions".

Another change in the map showed that the international border lines lies along the eastern bank of Sir Creek, which was previously along the western bank.

The Pakistan cabinet also approved the decision to rename a major road in Islamabad as Srinagar Highway. The road was previously called Kashmir Highway.

The map also depicts parts of the erstwhile princely state of Junagadh as being part of Pakistani territory.

This is not the first time Pakistan has tried to portray Junagadh as being part of its territory. The 2012 Atlas of Islamic Republic of Pakistan also portrayed Junagadh as a separate territory.

The map also shows the Federally Administrated Tribal Areas as being part of Khyber Pakhtunkhwa province.

Pakistan plans to mark August 5 as a “Day of Exploitation” in protest against India.

India termed Pakistan’s move as an exercise in political absurdity.

“We have seen a so-called ‘political map’ of Pakistan that has been released by Prime Minister Imran Khan. This is an exercise in political absurdity, laying untenable claims to territories in the Indian State of Gujarat and our Union Territories of Jammu & Kashmir and of Ladakh. These ridiculous assertions have neither legal validity nor international credibility,” the Ministry of External Affairs said in a statement.

It added that this new effort only confirms the reality of Pakistan’s obsession with territorial aggrandisement supported by cross-border terrorism.