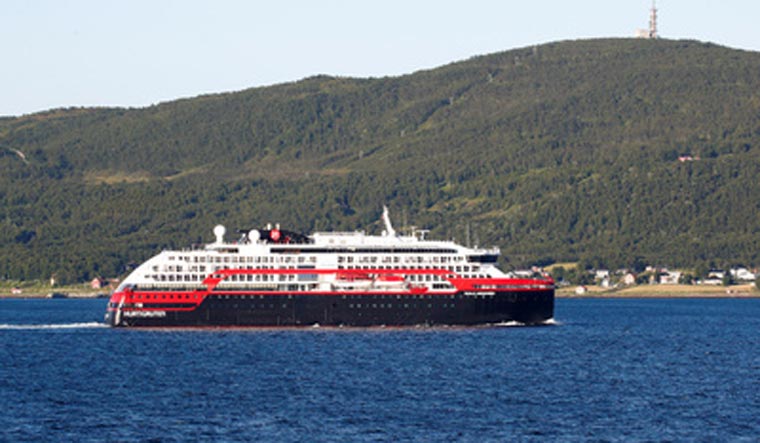 The MS Roald Amundsen ship, operated by Norway's Hurtigruten line, leaves a port in Tromso after its crew members were diagnosed with the coronavirus disease (COVID-19), in Tromso, Norway August 2, 2020 | Terje Pedersen/NTB Scanpix/ via REUTERS

One of the earliest COVID-19 horror stories were those of cruise ships, where a single passenger could end up infecting the entire ship, dooming its passengers to quarantine-at-sea.

The cruise liner industry was among the first to be shut down by the pandemic, as the conditions for transmission inside ships were too dangerous. However, over time, some cruises have resumed operations.

A Norwegian cruise ship line on Monday halted all its coming trips and issued an apology for "procedural errors" after four passengers and 36 crew members were infected by the coronavirus, with fears that passengers may have spread the virus across multiple ports along the Norwegian coast.

A preliminary evaluation shows that there has been a failure in several of our internal procedures, Hurtigruten CEO Daniel Skjeldam said in a statement. He added the company that sails along Norway's picturesque coast between Bergen in the south and Kirkenes in the north is now in the process of a full review of all procedures, and all aspects of our own handling."

The cruise line has contacted passengers who had been on the MS Roald Amundsen for its July 17 and July 24 departures from Bergen to the Arctic archipelago of Svalbard, which is known for its polar bears.

All 158 crew members on MS Roald Amundsen have been tested and 122 were negative. There were 209 guests on the first voyage and 178 guests on the second voyage.

But since the cruise ship line often acts as a local ferry, travelling from port to port along Norway's western coast, the virus may not have been contained onboard. Some passengers disembarked along the route and may have spread the virus to their local communities.

Norway has already responded by banning arrivals of cruise ships carrying more than 100 people to its ports.

Similarly, a French cruise liner on Monday had to confine 340 passengers and crew after one traveller tested positive, the commissariat for French Polynesia said late Sunday.

Everyone aboard the Paul Gauguin cruise ship will be tested and the passengers and crew will not be allowed to leave until the results come in. The companions of the passenger who tested positive have tested negative, however, both were taken off the ship.

The South Pacific archipelago started reopening to tourists last month and required that all visitors get tested before arriving and test themselves four days after entering the territory.