In 2015, Iran conducted a similar sinking exercise of a mock US aircraft carrier 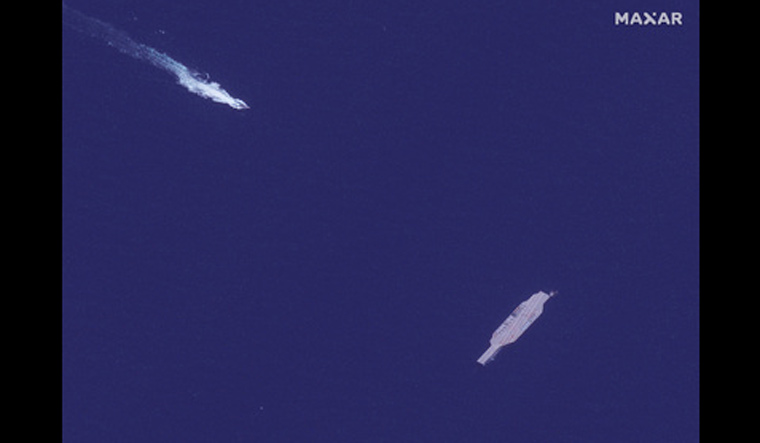 Iran has moved a mock-up of an aircraft carrier—resembling the USS Nimitz class of ships—out to sea in the Strait of Hormuz, possibly for impending live-fire drills, a show of force by the country amid tense relations with the United States.

Satellite photos by Maxar Technologies show the mock aircraft carrier, complete with model planes on deck, at Bandar Abbas before it is seen being tugged to sea by a speed boat.

Iran may be planning to sink the mock carrier in a live-fire drill, having conducted a similar exercise in 2015.

Then, the replica—which was built on top of a barge—was fired upon as part of a military simulation exercise by the Islamic Revolutionary Guard Corps and the Revolutionary Guards Navy. As part of the exercise, dubbed Great Prophet IX, the mock carrier was struck by several missiles including the Fateh-110 ballistic missile, even as it was swarmed by speedboats. Its sinking was widely seen as a a warning to show the kind of attacks US carriers can expect in Iranian waters.

The strategic Strait of Hormuz has been a site of contention between the US and Iran of late. Through it, a third of all global crude and other oil liquids is traded.

“We cannot speak to what Iran hopes to gain by building this mock-up, or what tactical value they would hope to gain by using such a mock-up in a training or offensive exercise scenario,” said Commander Rebecca Rebarich, spokeswoman for the U.S. Navy’s Bahrain-based Fifth Fleet, Reuters reported.

“We remain confident in our naval forces’ ability to defend themselves against any maritime threat,” Rebarich added.

The Fifth Fleet is responsible for patrolling the Mideast, and includes among its ranks the USS Abraham Lincoln, a supercarrier of the same Nimitz-class that the Iranian mockup aims to imitate.