The gunman demanded that the president endorse the 2005 film 'Earthlings' 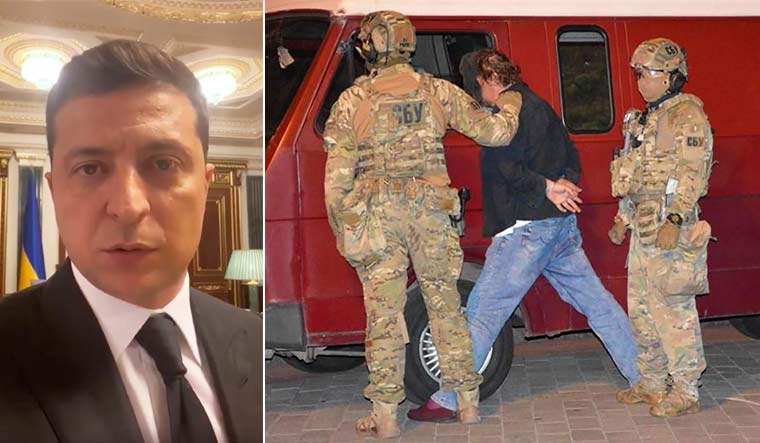 Screenshot of the video in which President Volodymyr Zelenskiy endorses the 2005 film Earthlings, a photo of the gunman being led away by Ukrainian security forces | Ukrainian Presidential Press Office via AP, AP/PTI

A tense hostage crisis in the city of Lutsk in Ukraine ended on Tuesday after the country’s president publicly endorsed a 2005 animal rights documentary narrated by Joaquin Phoenix, at the behest of the hostage-taker.

“Everyone should watch the 2005 film Earthlings,” Ukraine President Volodymyr Zelenskiy said in a six-second clip posted on Facebook.

13 people who were taken hostage in a bus by an armed 44-year-old man carrying explosives who was identified as Maksym Kryvosh have been released, while the man was apprehended by police. Zelenskiy later deleted the video he had posted on his Facebook page.

Nobody was injured in the standoff.

Ukrainian President Volodymyr Zelensky later said that it was initially unclear as to what Kryvosh’s demands were, but that the most important thing he felt about the ordeal was to ensure no loss of life. “We agreed that he would release three people and after that I will record a video,” Zelenskiy said. “We are not fighting for popularity ratings, we are fighting for life. This is the primary value for me,” he added.

The gunman had a range of demands, including asking several Ukrainian politicians to post video statements saying that they were terrorists. He had reportedly released a manifesto on Twitter, besides several posting critical tweets about Ukrainian leaders. An ex-convict, he had served time in prison for fraud and for illegally possessing weapons.

Images of his arrest were later shared by the president. He had reportedly threatened to detonate the bus as well as a bomb in the city, and was described as having extreme views.

The film, directed by Shaun Monson, covers five aspects of how humans utilise animals for economic purposes: As pets, food, in clothing, for entertainment and for scientific research. It contains many harrowing scenes of the cruelty inflicted upon animals in the factory farming industry.

Both Phoenix and Monson have been strong advocates of animal rights over the years, and prominent vegans. Earthlings won numerous accolades following its release and remains a cult favourite for its unrelenting depiction of scenes of animal abuse.

Ukraine’s Interior Minister Arsen Avakov said, “The film this man is talking about is good. And you don’t have to...create such a nightmare for people all over the country. The film can be watched without it.”