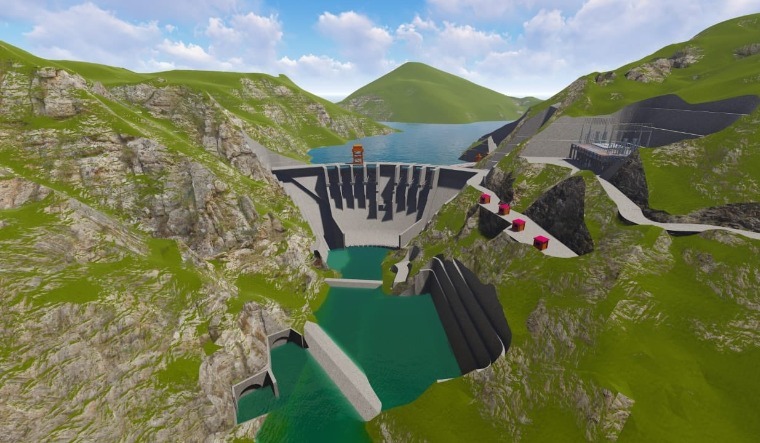 A computer-generated image of the Azad Pattan dam | Via Twitter

Pakistan Prime Minister Imran Khan on Monday witnessed the signing of an agreement with China Gezhouba company for constructing a massive hydroelectricity project in Pakistan-occupied Kashmir.

The Azad Pattan hydropower project, worth $1.5 billion, is located on the Jhelum river at Sadhanoti district in Pakistan-occupied Kashmir and expected to be completed by 2026.

The Azad Pattan project will be built as part of the China-Pakistan Economic Corridor, which involves ventures valued at $62 billion.

The Azad Pattan project will generate 700.7MW of electricity and according to the Pakistan government "will involve no fuel import, thus enabling the country to move towards cheaper and greener power while generating local job opportunities".

However, the Azad Pattan project has attracted criticism, not just from India, but also from residents of Pakistan-occupied Kashmir. News agency ANI reported that residents in Muzaffarabad in PoK staged a “massive rally" on Monday to protest against the Azad Pattan and Kohala dam projects.

The Kohala project is also being built with Chinese help and envisages production of 1,124MW of electricity by 2025. The Kohala hydroelectric project involves investment of $2.4 billion.

ANI reported the protesters in PoK highlighted environmental impact of the dams being built by Pakistan and China in the region.

"The protesters asked under which law is the river agreement of disputed region signed between Pakistan and China? They said that Pakistan and China are violating UN Security Council resolutions by occupying rivers," ANI reported.

China's Three Gorges Corporation had won rights to build the Kohala project in 2015. However, progress has been slow.

In January 2018, protesters in PoK blocked the Muzaffarabad-Rawalpindi highway. They had then claimed Three Gorges Corporation had not worked to " remove people's apprehensions over the project".

The Kohala project witnessed months of delay in 2018 as residents and activists alleged the construction would reduce their water supply and cause environmental damage. The protests included a general strike in Muzaffarabad.